On his morning-walk a month ago, 27-year-old Raj Milind heard an animal's sob. He followed the whimper and realized it was coming out of a filthy storm-drain. When he peeped, he noticed a puppy, almost drowning, was struggling to escape. He asked for help, but was advised to let it die. But then Milind did something unexpected: he made a drone to rescue it.

Action
He made his rescue machinery in 6 hours!

"I couldn't imagine that it was stuck there (for two long days)," said Milind, who decided to help the tiny soul all by himself. An AI fanatic who makes robots for a living, the Lucknow techie rushed to his lab and started building his rescue operation machinery. He assembled an AI-controlled robotic arm and attached it to a drone - all within 6 hours!

He returned to the spot and deployed the drone over the drain. Using remote control, Milind made the robotic-arm enter the drain and wrap itself around the puppy. Attached with smart heartbeat sensor, the arm 'knew' when to stop tightening the grip to avoid accidental suffocation. After sometime, it emerged out of the drain, crossed the road and dropped the puppy to safety.

Adopted since
The puppy now has a name and address 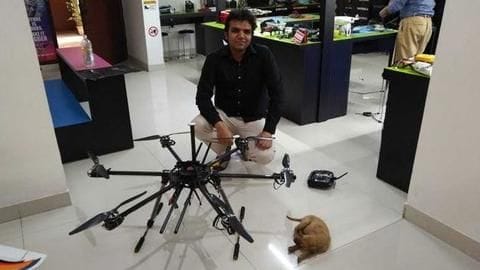 The puppy, once on ground, threw up and vomited pan masala packets and black drain water, Milind recalled. But why take such a risk? "It wasn't possible for a human to rescue the puppy without endangering their own life, so I decided to put technology to the task," he said. The puppy, now called 'Lifted', has been adopted by Milind since then.

Do you know?
His humanoid also greeted Modi during an event

Milind has a knack for using technology to serve animals and human beings. At the UP Investors Summit of 2018 held in February, his creation, A.I. (C3) Robotic Humanoid was a prime feature. The trilingual robot also welcomed PM Narendra Modi to the event.