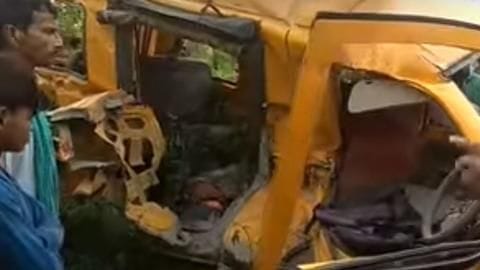 At least 13 children were killed this morning when a train rammed into their school vehicle at an unmanned rail crossing in Dudhi near Kushinagar, UP. Another seven are critical and the death toll might rise, a cop told ANI. UP CM Yogi Adityanath has conveyed his condolences and is reportedly rushing to the site.

"The CM has directed the district administration to provide all possible help and declared ex-gratia of Rs. 2L and also directed the Commissioner Gorakhpur to conduct an inquiry immediately on the cause of this accident," an official from the UP government said.

Details
People asked driver to stop but it was too late

According to reports, there were 25 students of Divine Public School in the vehicle. When they reached the crossing on their way to school, people at the site asked the driver to stop, but he was already on the tracks. Local media said the driver was also killed when the Thawe-Kapatanganj train (55075) hit the vehicle. The injured were rushed to Gorakhpur Medical College.

Absolutely shocking news! My heart goes out to the families that have lost their children in the #Kushinagar accident. May the young hearts rest in peace. I wish those injured a speedy recovery.

Accidents
Days ago, 23 children were killed in Himachal Pradesh accident

This is the second such accident involving a school vehicle this month which claimed the lives of several children. On April 10, at least 23 students aged died when their school bus fell into a 100m deep gorge at Malkwal in Kangra district of Himachal Pradesh. Top officials including the Gorakhpur commissioner and the UP agriculture minister have rushed to the Kushinagar accident spot.