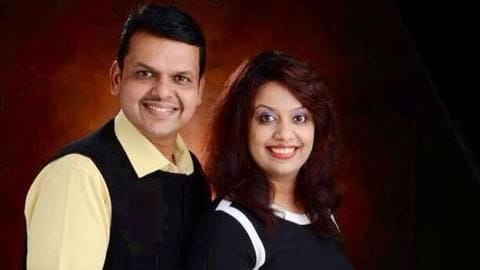 An almost 4-minute long video starting with a concerned Amruta at her residence in Malabar Hill and progressing to show her husband CM Devendra Fadnavis, along with other eminent government officials has drawn ire of Opposition parties. The video that talks about saving the city's rivers - Poisar, Dahisar, Oshiwara and Mithi - has been termed as "embarrassing video and hypocritical", by AAP members.

It's such shame that @fadnavis_amruta has been allowed to use the CM, CP and MC as props for promoting her singing career.
It's an embarrassing video and hypocritical too, since this govt is the one killing mumbai by destroy Aarey. pic.twitter.com/bEPtV6t6Z1

Released two days ago, the video titled 'Mumbai River Anthem' has already garnered over 6 lakh viewership. While Amruta has sung it herself, Sonu Nigam has sung for Devendra. Composed by Shubhash Kamod, the video has been directed by Sachin Gupta. "I had seen Amruta supporting the 'Rally for Rivers' with Sadhguru Jaggi Vasudev, and we had discussed this then," said Gupta.

Though the video is viral, Opposition parties are obviously not pleased. "The way a police commissioner and municipal commissioner are made to stand is an insult to them," said NCP leader Jitendra Awhad, referring to the appearance of Mumbai municipal commissioner Ajoy Mehta, police chief Datta Padsalgikar and Sudhir Mungantiwar, forest minister. MNS and even activists from the 'Save Aarey' group have joined in.

Bachchan urged too
'Clean Mithi river, get a foul smell even in Worli'

The video has been shot at Sanjay Gandhi National Park and also features the famous dabbawalas and fishermen. Recently, Union minister Nitin Gadkari has said he gets a foul smell in Worli and that it has become imperative now that the Mithi river be cleaned, along with others. Notably, a documentary featuring Amitabh Bachchan was released in 2014 talking about the same issue.