Apple seems to have found multiple ways to make the company's products better for users suffering from a wide range of mental and physical disabilities. The company's new SignTime sign language interpreter service will debut in the US, UK, and France. Apple also announced inclusivity-centric changes, such as AssistiveTouch, VoiceOver, and hearing aid support for iOS, iPadOS, and watchOS. Here are more details.

Convenient
SignTime debuted in US, UK, France on May 20

Apple's software updates for operating systems intend to make devices easier to use for those with mobility, vision, hearing, and cognitive disabilities. Apple launched SignTime on May 20. The service allows customers to communicate with AppleCare in American Sign Language (ASL) in the US, British Sign Language (BSL) in the UK, and French Sign Language (LSF) in France using a web browser.

SignTime allows customers to remotely avail of an interpreter's services instead of pre-booking when they visit an Apple store. AssistiveTouch for Apple Watch is quite impressive. Apple didn't say which watch versions would get the feature, but the company uses the watch's built-in accelerometer and gyroscope sensors to help "customers with limb differences" interact with the device using pinch and fist clench gestures.

Definition
Here's what Apple means by 'people with limb differences'

A person with a limb difference is one who has a partial or complete absence or malformation of limbs, either as a cognitive defect or as a result of an accident or condition that led to amputation. Around 30 million people have limb differences globally. 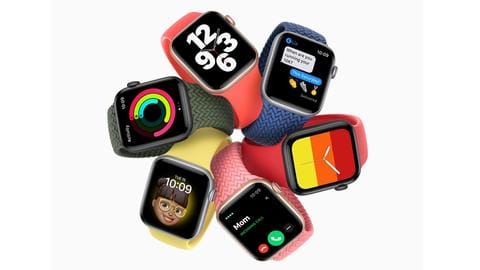 Apple claims AssistiveTouch combines sensor data with on-device machine learning to detect subtle muscle movements. The movements can then allow users to control a cursor on the watch display, access Notification Center, Control Center, accept or reject calls, and track workouts. All this can be done without the user ever touching the Apple watch screen. Although an accessibility feature, it's still pretty impressive.

On the iPad, users with mobility impairment can benefit from Apple's recently added support for third-party eye-tracking devices. Apple suggests users will be able to control the tablet using just their eye movements. An on-screen pointer will follow the user's gaze while extended eye contact performs actions, like tapping. Apple said these features will be enabled using MFi-certified devices later this year.

Additionally, Apple announced that the company's built in screen reader called VoiceOver will be able to navigate images with text, data tables by rows and columns, and describe people in images for the visually Impaired. Users can also use Markup to add their own image descriptions. Apple is also adding support for bi-directional hearing aids in its MFi licensed accessory program.

Another feature that could be more than an accessibility aid is Background Sounds. It helps neurodiverse people mask overwhelming sounds by playing continuous "balanced, bright, or dark noise, as well as ocean, rain, or stream sounds". Apple touched upon features in the pipeline for release later this year. It will let users with limited mobility and speech make sounds to perform physical button actions.

Definition
Neurodiversity: A term for people with mind-related disabilities

Neurodiversity is a non-scientific term describing people who have learning and cognitive disabilities such as ADHD, dyscalculia, dyslexia, and autism. Such people usually cannot filter important sounds and background noise. Their mind is easily overwhelmed in noisy places as it processes all sounds simultaneously.