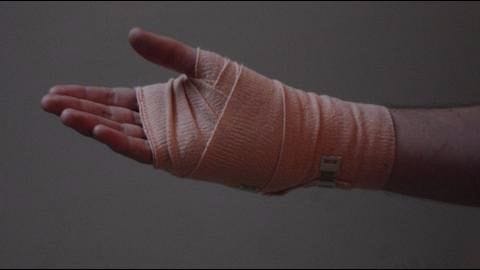 Innovation isn't always about creating a new solution. Sometimes it's about re-imagining an existing one. We all had cuts and bruises, and the process to handle those is simply put a bandage on it, take it off to put some medicine and then place the bandage again. However, what if the bandage itself could dispense the needed medicine? Now, it can. Here's more.

Bandage
Why do we need it?

For minor cuts, a simple bandage is fine. However, for chronic wounds or intense injuries, a smarter solution is needed. Therefore, researchers from University of Nebraska-Lincoln, Harvard Medical School, and MIT have come up with a smart bandage. It comes with a coating of electrically conductive fibers and hydrogel layer. This gel can carry antibiotics, painkillers or other medications, as per the requirement.

Patient
How does it work?

This smart bandage can be applied to a patient's wound. As and when needed, all the medical supervisor has to do is take out his/her smartphone and send instructions to the microcontroller embedded into it. This microcontroller would then send a small voltage to a particular fiber. That heated particular fiber would then end up releasing the medicine containing hydrogel to the patient's wound.

Solution
Why is this important?

A single strip of it can carry multiple medications. Therefore, all medications, catering to a specific wound, can be incorporated into a single bandage. Once the smart bandage is placed on the bruise, it would be possible to give the patient the precise dosage needed at exact timings. It's a solution that would aid in proper medication and accelerate the entire healing process.

Diabetes
How will it make a difference?

"This is the first bandage that is capable of dose-dependent drug release," said Ali Tamayol, assistant professor of mechanical and materials engineering at Nebraska. "You can release multiple drugs with different release profiles. That's a big advantage in comparison with other systems." The research team believes that initial usage of this bandage would include treatment of chronic skin wounds that occur to diabetes patients.

Patented design
When do we get it?

Although it's a patented design, it would take some more years to reach the commercial market, as it's undergoing tests. In the interim, the team is working on thread-based sensors to be integrated into the bandage. The sensors would be capable of measuring glucose, pH and other health-related indicators. Medical services and practices stand to benefit immensely from smart bandages.