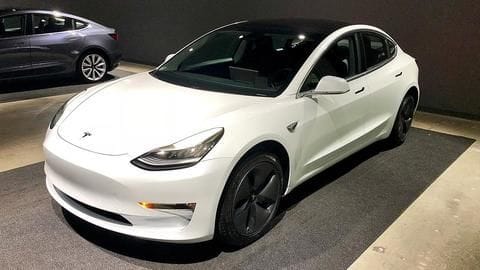 After a series of bad days for Tesla, thanks to the mercurial nature of the CEO Elon Musk, here's some good news. Model 3, Tesla's mass market-focused electric car, has bagged full marks in recent crash tests, reaffirming its position as one of the safest electric cars. The vehicle received a 5-star overall rating from National Highway Traffic Safety Administration (NHTSA) after acing all the categories of crash tests.

What are these categories? How safety levels are estimated?

NHTSA works to prevent loss of life due to vehicle-related accidents and conducts a series of tests, where every car launched in the US is treated with different crash scenarios. In each scenario, a dummy is positioned in the vehicle and the effect of a collision is noted to assess drivers' and passengers' safety. NHTSA, specifically, looks at frontal, side crash, and roll-over scenarios.

How did Model 3 perform in frontal crash test?

In the frontal crash test, NHTSA conducts a head-on collision with a brick barrier and simulates an impact between the vehicle in question and another similar vehicle - both moving at a speed of 54km/hr. Here, Model 3 performed up to the mark and earned a 5-star rating, with both front driver and passenger ends of the vehicle being marked safe.

And, what about side crash tests results?

NHTSA's side crash has been designed to simulate side collision with a barrier moving at 62 km/hr or a fixed object like a utility pole or tree. In both the test scenarios, dummy Model 3 passengers sitting on the front and rear seats survived the crash, bagging a combined five-star rating for the vehicle, again.

Here too, Model 3 was right on the money. The agency simulated a loss-of-control scenario and witnessed how likely it is for the vehicle to tip over on the road. Notably, the vehicle showcased a mere 6.6% roll-over probability and maintained its full-mark record. Model 3's performance follows the footsteps of Model S and Model X, both of which received glowing safety reviews.

While Model 3 nailed all the tests, NHTSA did note that the vehicle doesn't have dynamic head restraints, which activate automatically and reduce abrupt motion of head and torso during an accident.

Also, it is important to note these tests results show that Model 3 meets a certain safety threshold, but doesn't exactly confirm how safe the driver or passengers will be. For this, as Musk tweeted, NHTSA will be publishing a final safety probability report that will detail the likeliness of injuries in the studied scenarios.

Mob-ion AM1 e-scooter, with a 140km range, goes official

Rolls-Royce's 'Spirit of Innovation' is the world's fastest electric plane

Simple One scooter's deliveries to start from June: Details here

Musk may soon become first person with $300bn net worth

#NewsBytesExplainer: What is Tesla Autopilot and how it works?

NIO ET5 v/s Tesla Model 3: Which one is better?

Prior to launch, Tesla Model 3 spotted testing in Pune

Tesla recalls around 6,000 cars in US over loose bolts

No evidence to suggest healthy children need booster doses: WHO

In a first, US doctors transplant pig heart into man