In a historic feat, Stratolaunch, the largest plane in the world, has taken to the skies for the first time. The craft, developed for launching rockets into low-Earth orbit, has two fuselages and a ginormous wingspan of 385-feet, which is nearly as big as a football field. It's been in development and testing for the last eight years. Here's all about its first flight. 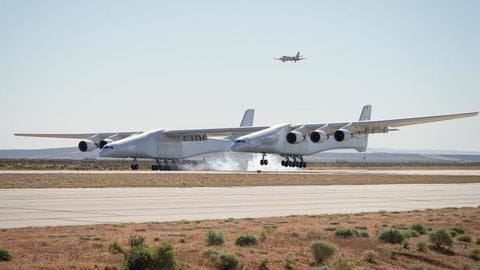 Built by Microsoft co-founder Paul Allen's Stratolaunch Systems Corporation, the 500,000-pound aircraft took to the skies after several powering and taxiing tests. The pilots fired all of its six Pratt & Whitney turbofan engines and flew up to an altitude of 17,000-feet at a peak speed of 304kmph. The flight lasted for about two and a half hours, following which the plane landed safely.

Though the mega-plane didn't carry any payload, the pilots did perform controlled maneuvers, including pullovers, pushovers, and heading side flips, to test the plane's handling and performance. "The flight itself was smooth, which is exactly what you want a first flight to be," said test pilot Evan Thomas. "It flew very much like we had simulated and like we predicted."

Ultimately, Stratolaunch Systems wants to use this plane for air-launching rockets and satellites in a consistent and affordable way. The company has not said how much it plans to charge for a single flight or when it will launch the first rocket. However, The Verge reports it has already partnered with Northrop Grumman to launch their Pegasus XL rocket into orbit.

"Today's flight furthers our mission to provide a flexible alternative to ground-launched systems. We are incredibly proud of the Stratolaunch team, today's flight crew, our partners at Northrup Grumman's Scaled Composites and the Mojave Air and Space Port."

Future
No word on next test flight

Stratolaunch Systems has not said anything about when it plans to conduct the next flight test of the aircraft. However, the development surely indicates that the company could trim down the cost of rocket launches significantly with this system, enabling access to space. It says the craft can fly up to 35,000 feet and support multiple launch vehicles.