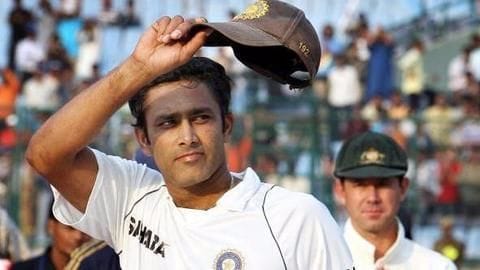 Former captain, coach and the best bowler that India has produced, Anil Kumble, turns 47 today. Kumble is only the 4th Indian cricketer to have been inducted into ICC's Hall of Fame. On his birthday, let's go down the memory lane to remember and cherish the achievements of this legendary leg spinner who also happens to be the country's leading wicket-taker.

Kumble has 619 wickets to his name from 132 Test matches, and is the third-highest wicket taker of all time, after Muttaiah Muralitharan and Shane Warne. To put this in perspective, the second best figures for an Indian are 434 wickets, by Kapil Dev. He has 337 ODI wickets from 265 innings, again the highest for an Indian bowler.

Anil Kumble has forever etched his name in cricketing history with his stunning performance during a Test against Pakistan on 7 Feb, 1999 at Delhi's Feroz Shah Kotla Stadium. Bowling India to victory, he blazed through the Pakistan's batting line up picking up 10 wickets in a single inning. He became only the second player after England's Jim Laker to achieve such a feat.

Kumble achieved his personal best ODI figures of 6/12 playing against West Indies in 1993, an Indian record which stood until 2014 when Stuart Binny overtook with 6/4 figures against Bangladesh.

First and last 100
Kumble's only century as batsman

For all his records, the 2007 Oval Test against England is something Kumble will surely be remembered for. While India took to batting first in the third Test, Kumble struck first and final Test century of his career. Interestingly, no one managed a hundred during this India's tour of England which included 9 ODIs and 3 Tests.

The opportunity to captain the team came late in Kumble's career. He was appointed the Test captain in Nov 2007. Under him India played 14 Tests, of which they won 3, lost 5, and drew 6. He retired from playing international cricket in Nov 2008.