Ranking the most memorable bowling performance in ODIs

Ranking the most memorable bowling performance in ODIs
Written by Ayush Gupta
Sep 06, 2019, 12:57 am 2 min read

The 50-over cricket match, generally known as One-Day International (ODI), is the most thrilling format of the game. It is a format, where both batsmen and bowlers can dominate equally. The format has witnessed innumerable memorable spells with the ball. From Muralitharan's 7/30 to a six wicket haul by Anil Kumble, we take a look at some of memorable bowling performance in ODIs. We start the list with one of the greatest bowlers, Muttiah Muralitharan. It was during the 2000 Champions Trophy at Sharjah when India were handed a tough task of chasing 295, after Marvan Atapattu and Mahela Jayawardene scored centuries. Meanwhile, Muralitharan made the chase even difficult as he ripped apart the Indian middle-order, as he finished with his career-best spell of 7/30.

Another Sri Lankan makes the list, and this time, it's probably their greatest pacer Chaminda Vaas. Playing against minnows Zimbabwe in an ODI in 2001, he just rattled the weak Zimbabwean batting order, dismissing eight batsmen, giving away just 19 runs. What was even unique that only one of his victims went to double figures, while the side was bundled for mere 38.

Pakistan's greatest all-rounder Shahid Afridi made more impact with the ball, rather than the bat. In the same light, his most memorable spell came in 2013 in Guyana. Playing West Indies, Afridi had already played a stellar knock of a 55-ball 76. Chasing a target of 225, the batsmen succumbed for 98. Afridi's valiant display with the ball helped him claim 7/12. 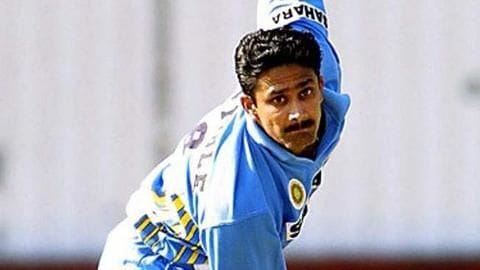 The greatest spinner from India has to feature in the list. It was in 1993 at Eden Gardens, India were taking on the Windies as the hosts posted an average total of 225. In reply, Anil Kumble (6/12) became a nightmare for the visitors, especially the middle-order, as he dismissed the last six batsmen, while he shattered the stumps on four occasions.

Stuart Binny might not be the greatest ODI bowler for India, however, this particular spell was surely one of the greatest. In 2014, while India were touring Bangladesh, the third ODI saw India being dismissed for only 105. However, Stuart Binny claimed six wickets while giving away just four runs in five, as India won the match magically by 47 runs.