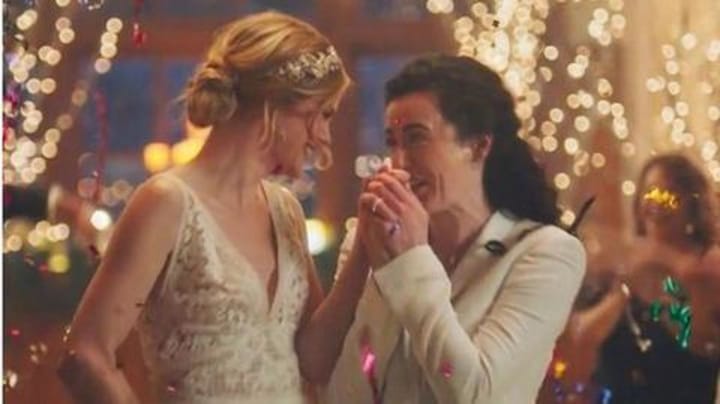 Recently, the Hallmark Channel aired a commercial with a same-sex couple. The broadcast commercial was for a wedding-planning company called Zola featuring a lesbian wedding where the two brides kiss. This invited criticism from Conservatives so Hallmark pulled the advertisements, only to invite more backlash from rights' groups and the public. Now, Hallmark has decided to reinstate the ads. Here's more on what happened.

Notably, Zola submitted six ads to Hallmark, four of which featured a lesbian couple. When the commercials aired, a Conservative group of Christian women 'One Million Moms' criticized the "family-friendly" channel. Later, the group wrote on its website that Bill Abbott—the CEO of Hallmark's parent company, Crown Media Family Networks—confirmed to them the commercials were "aired in error" and have been removed.

After Hallmark pulled the ads, it drew widespread criticism, even from prominent celebrities. TV host Ellen DeGeneres tweeted, "Isn't it almost 2020? @hallmarkchannel, @billabbottHC... What are you thinking? Please explain. We're all ears." William Shatner, who went into Twitter troll takedown mode, tweeted, "Shame on @hallmarkchannel! Put the commercials back!" Zola also pulled the remaining two ads and vowed to not advertise on Hallmark.

In a statement on Saturday, Hallmark's senior vice-president for public affairs and communications, Molly Biwer, said, "The debate surrounding these commercials on all sides was distracting from the purpose of our network, which is to provide entertainment value." Biwer added, "We just felt it was in the best interest of the brand to pull them and not continue to generate controversy."

The next day, Hallmark released a fresh statement

On Sunday, Hallmark released a fresh statement since the first one didn't do the damage control. "The Crown Media team has been agonizing over this decision as we've seen the hurt it has unintentionally caused," the statement read, adding that they're reaching out to Zola. Hallmark also announced that it would work with the LGBTQ+ rights advocacy group GLAAD to better represent the community.

Incidentally, GLAAD had initially condemned the removal of the Zola commercial as "discriminatory and hypocritical." GLAAD has now appreciated Hallmark's decision to course-correct, saying it "sends an important message to LGBTQ people and represents a major loss for fringe organizations, like One Million Moms."