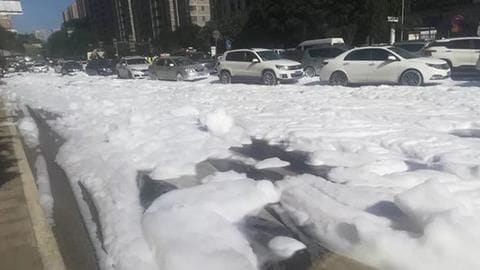 Recently, people of the city of Xi'an, China, were left dumbstruck when a mysterious white foam covered 200 meters of the street. Reportedly, the foam, which gushed out of the sewage pipes via manholes present on the road, quickly engulfed the entire street. The video of the bizarre incident later went viral on the Chinese social media sites. Here's more.

Workers could get rid of the foam only by evening

In the viral video, the foam can be clearly seen flowing out of the manholes and taking over the street. The workers, who came to clean it, were left shocked. According to local reports, when they tried to clean the foam from the street, it kept coming back. It was only by evening that they were able to get rid of it totally.

Watch how the 'mysterious' foam covered up the entire street

Authorities tested foam sample, said it is harmless to humans

After the incident, an investigation was launched to look into it. The residents of the area also complained of a 'strong, pungent smell'. As per reports, the local environment department took a sample of the foam and confirmed that it was an agent used in the construction of metro tunnels, which is non-toxic and is not harmful to human beings.

Bengaluru has been experiencing similar situation over the years

Back home, Bengaluru also witnesses a similar situation when the Bellandur lake spews up toxic foam on the busy streets of the city time and again. According to a study at the Indian Institute of Science in Bengaluru, the lake was affected due to untreated sewage water and industrial effluents that flow into it. Reportedly, the foam even causes breathing difficulties and skin irritation.