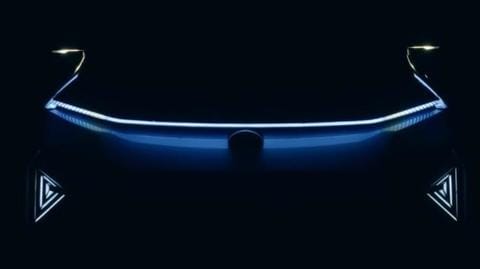 Homegrown automaker Tata Motors will unveil a concept SUV in India on April 6. It will be fueled by an electric powertrain. In the latest development, the company has released a teaser video of the upcoming vehicle, highlighting important design elements. The video suggests that the car will have split-style headlights, cameras instead of ORVMs, and alloy wheels, among other highlights.

Context
Why does this story matter?
Exteriors
The car will have triangular air vents and blue paintwork

The upcoming Tata concept electric SUV will have a closed front grille with the brand's logo and split-style LED headlamps with lighting elements on the bonnet crease and triangular air vents. On the sides, it will be flanked by B-pillars, cameras instead of ORVMs, and aerodynamically-designed alloy wheels. The car will sport a couple-like sloping roofline and a blue paint job.

Information
It will run on an electric powertrain

The upcoming Tata concept vehicle will draw power from an electric powertrain in India. However, the details pertaining to its specifications and power figures will be disclosed at the time of its unveiling.

Tata's concept electric SUV is expected to have a spacious cabin, featuring auto climate control, key-less entry, parking sensors, rear AC vents, and a multifunctional steering wheel. The safety of the passengers should be ensured by multiple airbags, ABS, a rear-view camera, EBD, and crash sensors. It might also pack a touchscreen infotainment console with support for the latest connectivity facilities.

Information
What about its availability?

Tata's new electric-powered SUV will be a concept model. It might either head to production or its design elements and features will make their way to another car by the company in the future.