Everything about Amazon's 6,000-dog-strong workforce 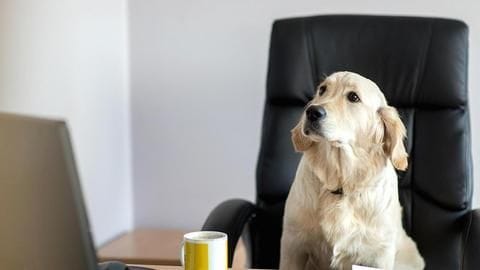 Amazon employees share their workspace at the company's Seattle-based headquarters with 6,000 dogs, the retail giant announced in a blogpost. Lara Hirschfield, Amazon's "Woof Pack" Manager, said, "Dogs in the workplace is an unexpected mechanism for connection. I see Amazonians meeting each other in our lobbies or elevators every day because of their dogs." The company takes pride in being dog-friendly since day one.

Facilities
Perks for dogs at Amazon

Every reception desk in the company keeps dog treats. On the 17th floor of one of the buildings, Amazon has built a doggie deck with fake fire hydrants, designated dog relief areas, and dog-friendly water fountains. The company also offers a leash-free community dog park and events like the popular Barktoberfest on Halloween, which features dog-friendly activities and even a doggie costume contest.

Legacy
It all started with a dog called Rufus

During Amazon's early years, a couple brought their Welsh corgi named Rufus to the office. He became an instant hit among the employees, many of them playing with him and also using his paw to click on links on Amazon.com. Rufus has since passed away, but Amazon still has his photos around the company campus. A building has also been named after him.

"If you land on one of the company's error 404 pages, you'll be introduced to some of the dogs that come to work with their owners regularly," Amazon said. Popularly featured dogs include Rufus, Lucy the Labrador, Sherriff the golden-Aussie mix, and Martini the papillon.

Data
The relation between dogs and happier workplaces

According to a study by the Central Michigan University, dogs encourage people in group office settings to be more cooperative, communicative, and friendly. Companies like Google, Salesforce, and Etsy also use pet-friendly workplaces to attract millennials. Another report by the Society for Human Resource Management states that the number of employers allowing pets in office has now increased to 7% from 4% in 2014.

Taking my new dog for a walk at the #MARS2018 conference. #BostonDynamics pic.twitter.com/vE6CXrvV3o