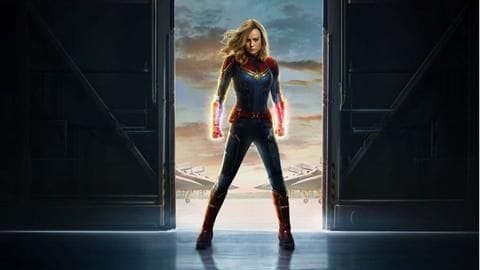 'Captain Marvel' is scheduled to release on March 8, 2019. But, the film's trailer got released recently. While comic fans are excited about the new hero being introduced in the Marvel Cinematic Universe, Captain Marvel is not a superhero name most MCU fans are familiar with. Read on to know about Captain Marvel, the trailer and how it affects the Avengers.

Film details
What is the Captain Marvel film about?

Captain Marvel's movie is a period piece, much like Captain America. The trailer establishes the 90s settings immediately with a shot of Blockbuster Videos, the popular rental service. The trailer goes on to show Brie Larson as Carol Danvers, aka Captain Marvel, as she tries to balance life on earth and fight the intergalactic Kree-Skrull war. Notably, this is Marvel's first female superhero movie.

Key aspects
What caught our attention in the trailer

The trailer shows Marvel moving away from light humor while introducing new characters. This is not an origin story as Danvers already has Captain Marvel's powers. Jude Law is Mar-Vell, the original Captain, and her mentor. Nick Fury, Phil Coulson return and discerning viewers will notice Fury and Danvers communicating via pager. Notably, Fury paged Danvers for help at the end of 'Infinity War'.

The character of Captain Marvel, in film, will draw inspiration from Kelly Sue DeConnick's 2012 comic run where Carol first took up the mantle of Captain Marvel. The Kree-Skrull war which will drive the film's plot is inspired by the famous 1971 Roy Thomas run.

Character
Who is Captain Marvel?

Captain Marvel will be one of MCU's strongest characters upon introduction. Danvers, a skilled Air Force pilot, joined the CIA and met Nick Fury. Her career later took her to NASA where she met Mar-vell, the Kree fighter. Born in Boston, Massachusetts, Danvers first appeared in the 1967 comics. The film introduces her as a member of an elite Kree military unit, Starforce.

Do you know?
So close and yet so far

Captain Marvel was first supposed to appear in 'Avengers: Age of Ultron'. However, her character was removed as it seemed unwise to introduce her without a proper backstory. She was also slated to appear in Jessica Jones' television show but was replaced by Trish Walker.

Powers
What powers will Captain Marvel bring to the table?

Danvers is classified as a Power Level 8, according to Nick Fury's intel. Apart from superhuman strength, stamina, durability, speed, and reflexes, she can also fly. Her hyper-cosmic awareness enables her to anticipate opponent moves. Her strongest offensive attack is photonic blasts which might be akin to Iron Man's blasters. Her greatest strength is energy absorption which enhances all her other powers.

History
The history of Captain Marvels

Carol Danvers was not the first to wear the Captain Marvel mantle. The comics have had eight Captain Marvels. Danvers' character was at first a love interest to Captain Marvel. Half Kree, half human Danvers was created by an accident from Psyche Magnetron, a machine that helped turn thoughts to reality. The infusion of the genes is what gives Danvers her powers.

Captain Marvel's current film will see the Kree-Skrull fight play out. Fans of the cinematic universe might recognize the Kree warrior Ronan, the radical, who appeared in 'Guardians of the Galaxy'. However, with Captain Marvel's powers, she will be instrumental in defeating Thanos. We are especially excited to see if she can use her energy absorption to turn the Infinity Stones' power against Thanos.