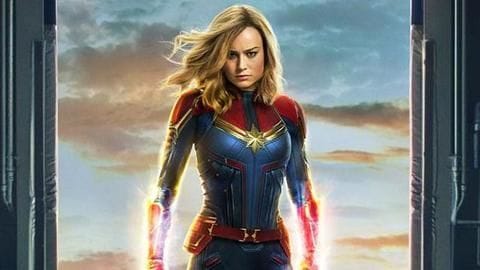 Captain Marvel released a new clip ahead of its release on March 8. It debuted during the 2019 Grammy Awards show. The clip is another in a long line of small snippets viewers have been offered, to get them hyped about the upcoming MCU movie. This time we see Carol Danvers or Captain Marvel fight against all odds and harness her superpowers. Read on.

The clip starts with a whispering voiceover, that repeats the previous clip's mantra 'higher, further, faster'. Despite the optimism, we see Danvers fail and fall several times, as a little girl and during her military training. Words of discouragement can be heard, like 'you won't last a week', 'they'll never let you fly', 'this isn't a game for little girls' and 'give it up'.

Fight back
Danvers, with clenched fists, fights back against all negativity

Upon hearing someone ask her to give it up, Danvers clenches her fist in defiance. Both as a child and an adult, the gesture is remarkable, though the latter sees her fists powered up with energy. As she manages to succeed against all odds, becoming a distinguished pilot and a skilled Kree warrior, we see the scene shift to Danvers wearing Captain Marvel's outfit.

With Danvers getting back on her feet and showing defiance, we are treated to a more confident version of the character played by Brie Larson. She is seen telling someone, "I'm kinda done with you telling me what I can't do," before we see her in space, in full battle uniform as Captain Marvel, taking on several spaceships and showing off her impressive powers.

The aspect of Danvers asserting her position despite male voices telling her she is unworthy is the exact kind of feminist message that Marvel will seek to send through the Captain Marvel movie. Notably, this is Marvel's first standalone female superhero film, and Danvers seems to be the perfect character to prove how gritty and determined women superheroes can be in the Marvel universe.