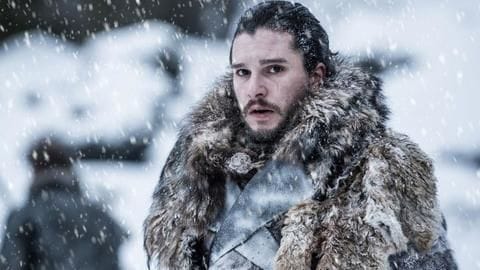 Hang on to your warm clothing for a little longer, because the official release date of the final season of Game of Thrones has been revealed. Winter is coming to HBO on April 14, 2019. A new teaser was revealed along with the release date, both of which aired before the pilot of the third season of True Detective. Here, we decode the teaser.

Teaser details
The Stark kids visit the crypts of Winterfell

The teaser shows Jon Snow (now revealed as Targaryen), Sansa and Arya Stark visiting Winterfell's crypts. They are haunted by memories of their dead parents. Lyanna's statue seems to whisper, the child must be protected. Ned tells Jon he has Stark blood, if not the name. Sansa and Arya hear Catelyn lament that if she had loved Jon, tragedy would not have befallen them.

As the Starks continue down the hallway, past the statues of the dead who seem to keep whispering to them, icy death creeps up from behind. The hallway lit by flames goes dark and a chill begins to approach down the hall. Jon and Arya immediately draw out their swords to face the approaching danger while Sansa looks concerned, signalling the war to come.

Season 8
But, no actual footage from Season 8 shown

The teaser hinted at how the long night and the White Walkers were coming for everyone, and how the Starks would be on the frontlines. However, it did not actually give away any actual footage from Season 8. Up to this point, footage from Season 8 includes the glimpse of the meeting between Sansa and Daenerys Targaryen where the mother of dragons gets Winterfell.

HBO chief Richard Plepler described the final season as 'six movies' rather than 6 episodes. Speaking of Season 8, he said, "They knew the bar was high. They've exceeded the bar. I've watched them twice without any CGI and I'm in awe. Everybody's in for an extraordinary treat of storytelling and of magical, magical production". Start the countdown, as winter arrives in 90 days!