Kapil Sharma signs his next, a Sajid Nadiadwala-backed venture 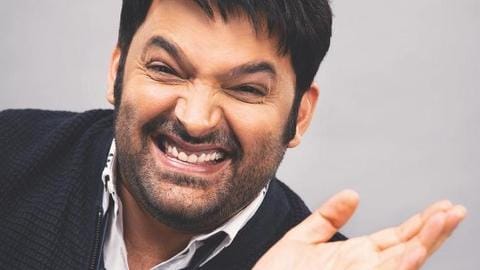 Kapil Sharma is on a signing spree! After Nandita Das, ace producer Sajid Nadiadwala has announced on a TV show that he and his team are writing a script keeping Sharma as the central character. Details about the project will be officially shared after a couple of months, Nadiadwala added. Sharma, as an actor, last appeared in It's My Life in a cameo appearance.

Details
Nadiadwala will appear on 'The Kapil Sharma Show' this weekend

We learn of this development from a promotional clip of The Kapil Sharma Show. From it, we get to know that this weekend's episode will be Nadiadwala Special, to commemorate the 67-year-long journey of the Nadiadwala Grandson Entertainment. Naturally, Nadiadwala and his wife will grace the stage in that episode. Also, Nadiadwala's frequent collaborators Tiger Shroff, Kriti Sanon, and Ahan Shetty will be present.

Information
What did Nadiadwala say in the promo clip?

In the 2:52-minute-long video, we see Nadiadwala expressing how The Kapil Sharma Show feels like "my own." "I treat this show like my own because I was the one who recommended Archana Puran Singh (judge on the show) in the industry...Navjot Singh Sidhu for the commentator's role in Mujhse Shaadi Karogi, followed by Sumona Chakravarti, and now it's Krushna Abhishek, (Sudesh) Lehri," Nadiadwala says.

Quote
What did Nadiadwala say about Sharma's project?

Further, Nadiadwala jokes that he is also the "producer of the star who is the producer of this show aka Salman Khan." At the fag end of the clip, we hear him spill beans about the project that will star Sharma. "We are in the process of making a script for Kapil and will share the news in the next two months," he informs.

While we await further details, let's take a look at Sharma-Das's upcoming film. Last week, Das announced her movie will show Sharma in "a never seen before avatar of a food delivery rider." She also said Shahana Goswami will be the female lead, adding the filming will begin soon. Das will co-produce the film via Nandita Das Initiatives along with Sameer Nair's Applause Entertainment.