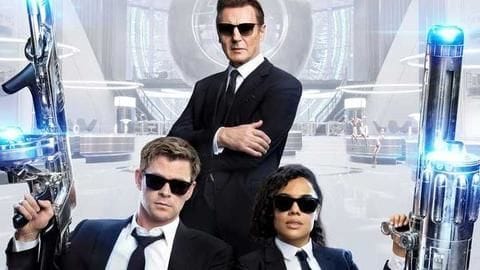 Men In Black was the coolest science fiction movie I saw, growing up. Men in black suits with cool futuristic guns battled aliens and wiped out people's memories to retain secrecy. However, after three films, the franchise felt dead, till the recent trailer for Men In Black International released. It breathed fresh life into the franchise, with a new cast and a stylish approach.

The new film introduces Chris Hemsworth and Tessa Thompson as the protagonists, with Liam Neeson and Emma Thompson in supporting roles. Scheduled to release on June 14, 2019, it is the fourth film in the 1997 franchise that is based on the Aircel comic series, Men In Black. The new film is directed by F. Gary Gray of The Fate of the Furious fame.

Men In Black International evolves beyond the familiar haunts of the first 3 movies, and bases itself in London. Hemsworth and Thompson's characters are introduced as agents H and M respectively. M joins the MIB under the tutelage of H as they must protect the earth from an alien threat. Sporting new guns, weapons and action sequences, the movie promises to be a success.

Features
What stood out in the trailer?

The trailer showed the new approach the film would take. Firstly, it set off the mystery of Agent M's character whose backstory is not disclosed. It also introduced a threat from a mysterious alien force, not shown in the trailer. More importantly, the movie moves from the buddy cop procedural formula of previous installments, to a blockbuster action sequence formula, which guarantees success.

The trailer taps into our nostalgia as we see portraits of Agents J and K (Will Smith and Tommy Lee Jones/Josh Brolin) on the HQ walls. Despite this, it pushes the new film into new territory, showing MIB as a global agency. If the franchise takes off, they could have other MIB offices across the globe, casting different actors as the protagonist agents.