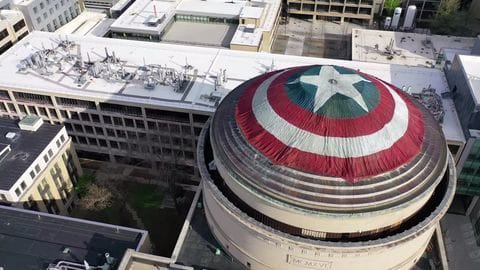 In celebration of the release of the highly-anticipated Avengers: Endgame, a group of pranksters at the Massachusetts Institute of Technology turned the school's dome into the Captain America's shield on Sunday. Endgame, which was released last Friday, concludes the decade-long infinity saga and also (spoiler alert) bids adieu to Steve Rogers aka Captain America. Here are more details about the prank.

Details
MIT students have been planning this for about a year

According to a Boston Globe report, one of the pranksters, who call themselves "hackers," revealed that this prank was executed with the help of a dozen people. Reportedly, they had started planning over a year ago, when the movie was announced. Soon after the prank was executed, it went viral and Chris Evans, who plays Captain America, himself tweeted about it.

Do you know?
This was their way of honoring the 'Avengers' franchise

Speaking to Boston Globe, the prankster, who chose to remain anonymous, revealed that the current generation of MIT students have grown up with the Marvel Cinematic Universe. Reportedly, this prank was their way of honoring the franchise and saying goodbye.

Video
An MIT sophomore uploaded the video on YouTube

Meanwhile, a sophomore at MIT, Raymond Huffman, filmed the dome and uploaded a video of it on YouTube. "It was super exciting to see it in the morning all set up," Huffman told Boston Globe, adding that he wasn't involved in the prank, but decided to film the dome after he found out about it. "Everyone thinks it's awesome," he added.

History
What is 'hacking'?

At MIT, students have a long history of playing around with the 150-foot-high Great Dome of the McLaurin building. This long-standing tradition among MIT students is called "hacking". In the past, a police car was placed atop the dome in 1994, and in 1996, students had even managed to put a piano up there. In 1999, the students also paid an ode to R2D2.