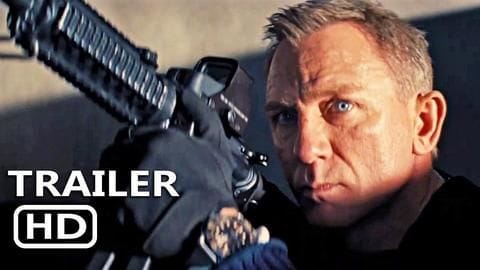 The second trailer of the much-awaited James Bond flick No Time to Die dropped recently and it blasts out more thrill than a trailer can take in. Released on Thursday, the clip has already clocked in 5.3 million views on Twitter. Notably, this is the last time Daniel Craig will don the hat of secret agent 007. Here are more details.

Description
The trailer is loaded with high-octane action sequences

The trailer, lasting some 2.34 minutes, starts with the secret agent's death-defying drop from the bridge. He eventually bangs hard against one of the pillars and lands with a loud thud on the ground. Bond is tired, but this is a special request that he has granted. This film also brings closure to Bond's unfinished business with Safin, played by Oscar-winning actor Rami Malek.

There are some characters returning to the film who worked with Craig during his five-film stint with the franchise. They are Dr. Madeleine Swann, played by Léa Seydoux, Q played by Ben Whishaw, Ernst Blofeld played by Christoph Waltz, MI6 leader M played by Ralph Fiennes, Eve Moneypenny played by Naomie Harris and Felix Leiter played by Jeffrey Wright. Probable grand goodbye for Craig?

As if this wasn't enough to floor fans, a brand new poster was also released on September 2. It had an out-and-out retro feel with Craig looking like taking the stance behind a cover to fire when the time is right. The color contrast of his dark, suave tuxedo and the golden letters spelling out the film name reminded fans of the yesteryear's fashion.

Injuries
Craig returns to being Bond after five long years

The film will release in November, giving a much-needed boost to pandemic-ridden audiences who want to see more action after Tenet and Unhinged. However, this is the last time Craig would be seen as 007. Earlier, he had gone on public about his resignation from the franchise after Spectre. Multiple injuries incurred during filming for Bond films prompted this decision, he had said.