'O Saiyyonii' review: Pawandeep-Arunita's chemistry is the only driving factor 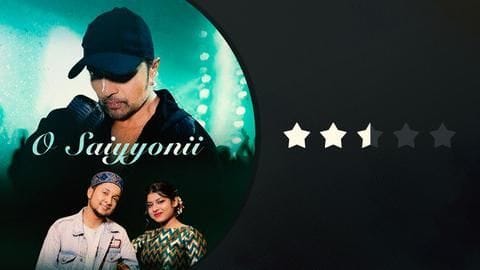 Himesh Reshammiya has roped in singers Pawandeep Rajan and Arunita Kanjilal of Indian Idol 12 fame for the third time in the romantic track, titled O Saiyyonii. Part of Reshammiya's album Himesh Ke Dil Se, it has been released recently. Rajan and Kanjilal feature in the video and it seems their chemistry is the only thing that's helping it to trend. Here's our review.

Song
Start is refreshing but the length brings its effect down

The Bekhudi crooner, who was also a judge in the recently concluded Indian Idol season, has himself given the music and written the lyrics for the song. Complemented with folk sounds and a rustic beat, the start of the song is quite refreshing. What pulls it down is its length and monotonous rhythm. We really didn't need a five-minute track on the same beat.

Comments
Auditory pleasure derived from the studio version is commendable

Although chances are you won't be able to focus on the song till its conclusion, the auditory pleasure is commendable, given it is a studio version. Tip: Listen to it only via earphones. Rajan and Kanjilal, who are an established duo, carry out their task well and their voices sound beautiful together. Also, it's a gift to their fans amid all the romance rumors.

Quote
'It's a romantic track, but boasts of a contemporary vibe'

Before the song's release, Reshammiya had been confident with the end product. "This one, O Sayyoni, is yet another [when compared to their earlier collaborative works] sure-shot chart-buster. It's completely different from what is expected of these two. It is a romantic track, but boasts of a contemporary vibe and a touch of folk." The trio previously gave us Tere Bagairr and Terii Umeed.

Overall, it feels like the Tera Suroor star had a breakthrough with the composition, but then blundered during execution. Although with his star value, added with Rajan and Kanjilal's internet craze, the song might rise in the charts, but we definitely expected more from him. Notably, Rajan won the Indian Idol trophy this year, while Kanjilal was the first runner-up. Verdict: Song gets 2.5/5.