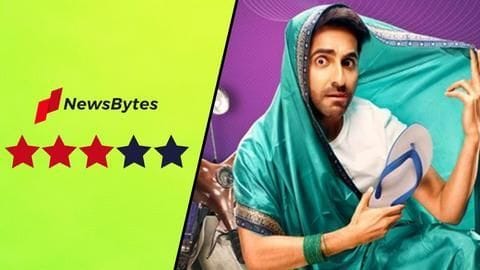 It would be quite unfair to have a bagful of expectations from a film like Dream Girl, but hurt strikes you when it promises to be more, and then fails to deliver miserably. Sure the film, directed by Raaj Shaandilyaa, and starring Ayushmann Khurrana and Nushrat Bharucha, is laugh-out-loud funny, but its (attempted) social commentary/message is an utter failure. Here's our review.

The film introduces you to Karam, a guy with an inherent talent of modulating his voice into a feminine one. He often finds himself dressed up as Sita Maiya or Radha in local Ramleela acts. But being desperately jobless, he turns into a night-time lady phone-pal at a "Friendship call center." Subsequently, our protagonist's life becomes a mess, which he then attempts to untangle.

Good part
Here's what works: The jokes are refreshing and hilarious

Undeniably, the one thing that the makers of Dream Girl got right about their product was that they wanted to make the audiences laugh. Did they do justice to it? We'd say yes. The jokes and punch-lines in Dream Girl switch to-and-fro funny and more funny, but never pale. And since the writing is fresh, your interest will stay alive till the end.

Bad part
What went wrong? Despite an attempt, the social-commentary is frail

Had the writer-director been content with making it a ROFL comedy, and nothing more- we would have been totally okay with it. But they aimed for more. They wanted to infuse social commentary and life-lessons (urgh!), and their treatment of these so-called messages is so weak and scattered, that - 1) it lacks any impact, and 2) it takes away room for more laughs.

Performances (1)
Ayushmann has again delivered, in every way possible

It would be wrong to ask more of Ayushmann in a film like this. The man, with his all-out expressions (and that voice) has delivered in every way possible. Given the brand that he has become, we naturally expect more depth and meaning from his films than this one could ever offer. Confession time: I'm a fan!

However, much like the film itself - Nushrat Bharucha as Ayushmann's love-interest looks pretty, but is marred by short screen-time and inconsistent acting. Moving on, Manjot Singh as our protagonist's best mate fits well in all the frames. On the other hand, veteran Anu Kapoor as a single father retrying his luck at love is in fine form.

While Vijay Raaz as a shayari-loving policeman does all he could in such a trivial role, Rajesh Sharma as a shrewd businessman/Khurrana's employer is simply terrific. Furthermore, the film also has Abhishek Banerjee and Nidhi Bisht in meaningful roles. Both manage to make their mark.

The cards are on the table now - if a good number of thoughtless laughs don't trouble you, you're good to go. But if like the makers, you want to give yourself the (false) hope that it's going to bring about a change of mindset about anything, that would be a lie one can only tell themselves for so long. Final verdict: 3/5 stars.