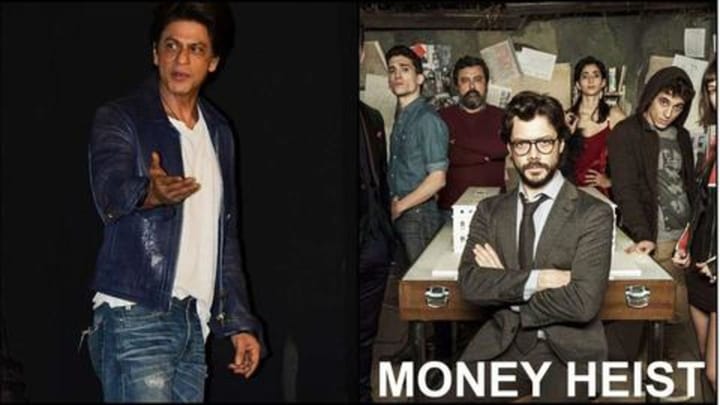 Recently, there were reports that Shah Rukh Khan's Red Chillies Entertainment is producing the Bollywood adaptation of Spanish series Money Heist. While the speculations got the fans excited, SRK vehemently dismissed the reports and called them mere rumors. Clearing the air, the Jab Harry Met Sejal actor stated, "Money Heist is a rumor. We are not doing that into a film".

SRK talks about his upcoming production on Netflix

Shah Rukh made this statement during his recent interview with Rajeev Masand. Talking about his upcoming productions, he said, "We have Bard of Blood, Betaal the horror one, we have Class of '83 and I was working for one of the series for Netflix."

The crime series is an intriguing story of heist

Earlier, a Mumbai Mirror report stated that SRK was keen to make a feature film on the crime-drama. "He loves the show and believes it can be adapted in the Indian context as a feature film," a source was quoted saying. For the uninitiated, Money Heist, which started in 2017, narrates a story of an unusual robbery of 2.4 billion Euros from a bank.

SRK is yet to announce his next acting project

Meanwhile, SRK, reeling under the Zero effect, is yet to announce his next (acting) project. While there have been speculations about him being in talks with directors like Sanjay Leela Bhansali, Rajkumar Hirani, etc., no official confirmation has been made. SRK is also rumored to be collaborating with 2.0 director Shankar for an upcoming sci-fi thriller wherein he will be playing an underwater superhero.

Traveling with diabetes: Tips for packing and snacking Travel And Tourism
Rolls-Royce is working on a nuclear engine for space travel Rolls-Royce
Sidharth Malhotra and Kiara Advani are officially married now!  Weddings
What is Google Credential Manager and how to use it Google