I worked for a mad man, says Ma Anand Sheela 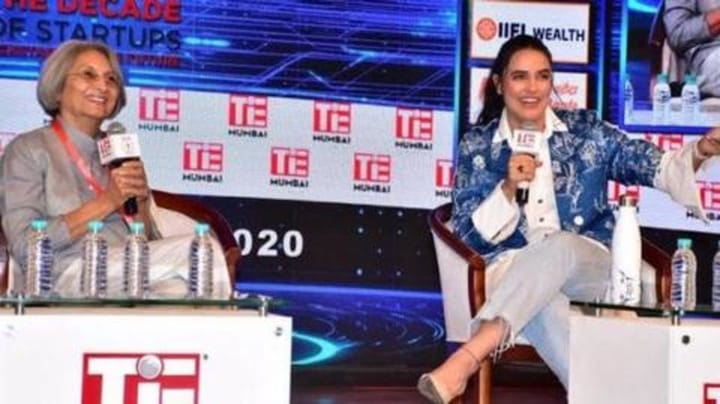 Actor Neha Dhupia recently had a fireside chat with Ma Anand Sheela, on the sidelines of the 11th edition of the TiEcon event in Mumbai. Sheela, the controversial former personal secretary of mysterious godman Bhagwan Rajneesh (Osho), talked about working with him, her life lessons, and managing her nursing homes in Switzerland, where she now resides. Here's more on what she said.

'Worked for a mad man, loved every minute of it'

Talking about the time when she worked with Osho, Sheela said, "I worked for a mad man and I loved every minute of it. Every hour of my existence now has...fragrance of Bhagwan's teachings that I have carried in my heart and my brains." "The way I run my nursing homes, there is same love and same intensity," she added.

Sheela said she wants to clean up India

During the said conversation, Sheela also stated that she wants to initiate a cleanliness drive in India. "I want to do a project where I would personally go on the streets and start cleaning it up," she said.

Elaborating on how she started her nursing homes, Sheela said that she rented a home and took in five elderly people. "You can complain about it only when you can do something about it," she said, adding that it's the same passion which inspires her to start a sanitation drive in India. Sheela today runs two nursing homes in Switzerland.

There is a certain spirituality in criminality: Sheela

When Neha referenced to a previous statement by Sheela that there are similarities between spirituality and criminality, the latter replied, "There is a certain spirituality in criminality." "What bigger crime is there than to sell you a product that has no guarantee? People sell meditation and enlightenment. Spiritual leaders make false promises...I cannot be duped by that," she asserted.

Who is Ma Anand Sheela?

Ma Anand Sheela (alias Sheela Birnstiel) is an Indian-born American-Swiss. She served as personal secretary of Osho and a principal spokesperson of the Rajneesh movement, during the 1980s. She managed the city Rajneeshpuram in Oregon, United States, where she was involved in many notorious acts including attempted murder and the infamous Rajneeshee bioterror attack of 1984. She served three years in a California prison.

Sheela has featured extensively in Netflix's six-part documentary series (Wild Wild Country, 2018). Meanwhile, Karan Johar is also producing a new documentary based on her life. Separately, she will reportedly be portrayed onscreen by Alia Bhatt in a film directed by Shakun Batra.