Avengers: Endgame is arriving in theaters on April 26, and will see the team of superheroes regroup and try to undo the catastrophic aftermath of Thanos' finger snap in Avengers: Infinity War. While film details have been kept under wraps, Tom Holland, who plays Spider-Man and is famous for giving spoilers, accidentally revealed an Endgame spoiler even before Infinity War had released. Read on. 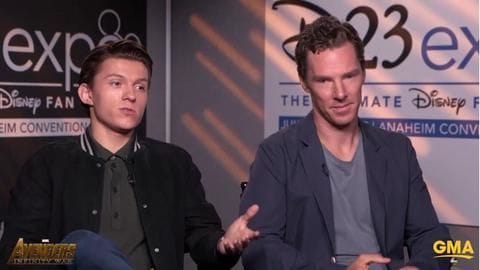 Ahead of the Endgame release, fans have discovered a video of Holland promoting Infinity War with fellow actor Benedict Cumberbatch, who plays Doctor Strange in the films. When asked about who makes the most fumbles during the shooting of the film, Holland let slip a massive spoiler that fans have now realized might be about the plot of the upcoming Endgame.

In talking about fumbling during shooting, Holland says that Cumberbatch fumbled more. He continued how this was excusable since he had more difficult dialogues. Holland said, "He has the most difficult lines though. He has to talk about so much Quantum Realm stuff. I just have to talk about, 'Yeah man, that's awesome'. Mine's easy, but his is all so difficult."

There was no mention of Quantum Realm in 'Infinity War'

Why is Holland mentioning 'Quantum Realm' a spoiler? Well, this is because there was no mention of the same by Cumberbatch's character, Doctor Strange, in the Infinity War movie. Furthermore, considering the two films were shot back to back, the actor most likely let slip a snippet of conversation that was actually filmed for Endgame. Maybe Holland should be more careful in future.

Holland's spoiler seems to substantiate a popular fan theory that the Quantum Realm will play a huge part in the upcoming Endgame movie. Most fans believe that the remaining superheroes will somehow make use of the Quantum Realm, possibly with Ant-Man's help, to go back in time and undo the actions of Thanos by stopping him even before he makes the catastrophic finger snap.