#2Point0Trailer: It's massive, Rajinikanth and Akshay in their best forms 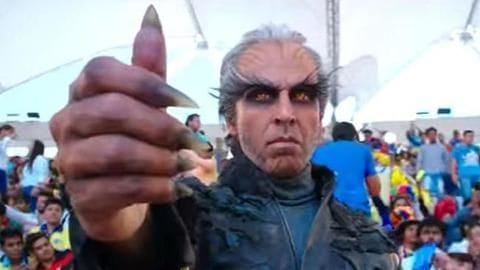 Bring Rajinikanth, the megastar idolized by millions, and Akshay Kumar, the superstar adored by an equal number, and you are sure to get something which is massive in every sense. This is what Shankar's '2.0' is all about, and the trailer which released a short while ago testifies this. The movie, all set to release on November 29, will be one-of-a-kind.

Like we already know, the movie is about the fight between humans and technology. Akshay, who is the antagonist, attacks the human world. Facing an unknown crisis, humans turn to Chitti, the robot who has a history of saving mankind. This leads to a battle between this world and what cannot be understood, and this is shown in an exemplary style in the movie.

What happened
Loud cheers for team highlight the trailer's impact

The trailer was released in Mumbai, at a jam-packed theater. Apart from Akshay and Rajinikanth, actress Amy Jackson, music maestro AR Rahman, director Shankar and other members of the crew attended the launch. At one point, South superstar Kamal Haasan also came on the screen to wish luck to the movie. Obviously, there were a lot of loud claps and cheers at the event.

The scale
The movie is undoubtedly an awaited one

The movie was supposed to release earlier this year but got pushed because Shankar wanted to ensure the result was perfect. To give a perspective, the movie's budget is Rs. 545 crore. 5 VFX studios were employed worldwide for 2,150 VFX shots. 1,000 VFX artists, 10 concept artists, 25 3D designers, 500 craftsmen, 3,000 technicians worked on the movie. We can't wait any longer.