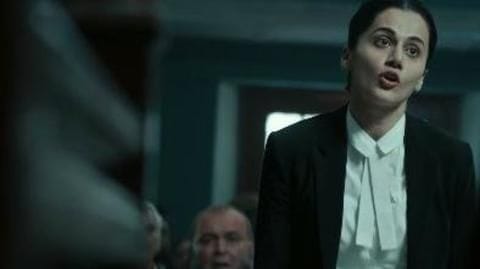 What happens to the family of someone who joins militancy? How can one really prove the love they have for their country? Is there a scale to judge patriotism, and if there is, who takes the test? The upcoming movie of Taapsee Pannu, Rishi Kapoor and Prateik Babbar titled 'Mulk' asks these poignant questions. A short while ago, the riveting trailer of 'Mulk' dropped.

The trailer
What we learned about 'Mulk' from the trailer

The trailer begins by showing the aftermath of a terrorist attack, one in which Prateik Babbar's character is involved. After it's established Babbar has fallen off the grid, his family is subject to undue hatred and is dragged to court in a trial. And from there, the journey to prove their love for India begins, with Rishi Kapoor taking the center stage.

Taapsee's character
Taapsee returns to court, but this time as a lawyer

After 'Pink', 'Mulk' is another courtroom drama in which Taapsee features. However, this time she is not on the stands but defending the Muslim family. The trailer proved her job is made difficult by Ashutosh Rana's character, who makes bigoted statements to prove the family is guilty. Like 'Pink', 'Mulk' also seems like a movie having clap-worthy dialogues.

Reactions
The trailer of 'Mulk' has left many astounded

Slated for a release on August 3, 'Mulk' is helmed by Anubhav Sinha. Considering the times we live in where communal hatred and bigotry seem to have taken over humanity, there couldn't be a better time to release the movie. After the trailer's release, Twitter users have already gone berserk and it seems they can't wait for the movie to hit the theatres.

Outstanding promo!!!! -sheer pleasure to watch these two on screen @chintskap @taapsee - proud of you my friend @anubhavsinha .... waiting for this one. #MulkTrailer https://t.co/8abHzRrbYO