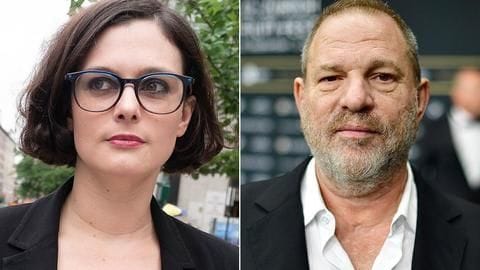 Harvey Weinstein is being tried for raping three women. Apart from that, several women have a class action lawsuit against him for harassment. Last night, one of the accusers, Melissa Thompson, revealed a video, which showed the disgraced Hollywood mogul behaving inappropriately with her on camera. She alleges that later that evening he raped her in his hotel room. Here are all the details.

Meeting Weinstein
Melissa went to pitch an idea, was harassed instead

In September 2011, Melissa went to The Weinstein Company's office with the intention of pitching the idea of her start-up's new video and analytics service. Naturally, she expected to make her pitch to Weinstein's marketing team. Instead, she met the mogul himself. He walked in and locked the door, asking not to be interrupted. What followed was the most harrowing experience for Melissa.

The monstrosity
After locking door, Weinstein showed what real monster he was

Weinstein's demeanor changed immediately after he locked the door for the meeting. He refused to shake hands with Melissa, and hugged her instead while running his hand up and down her back. Weinstein's interaction with her was inappropriate, edging into lewd, as he asked her if he could flirt with her, and went on to call her hot while she was pitching her idea.

Sexual misconduct
The tipping point in the meeting

Weinstein agreed to her pitch but played a game of sexual politics, where he exerted his financial privilege. The tipping point came when Melissa alleged he ran his hand up her leg. Though this action is off-camera, Melissa can be heard saying that it is a little too high. Weinstein can be heard lewdly asking for 'a little part' of her.

Problematic behavior
Melissa insists she never met anyone like Weinstein

Melissa was asked if she returned the advances from Weinstein. She denied it, but said she did not want to blow the meeting. However, one can see how Weinstein's persistence threw Melissa off as she tried to make her pitch. Notably, Melissa had worked in the male-dominated Wall Street and knew how to handle men, but she said she never met anyone like Weinstein.

Melissa says, "He was playing a cat-and-mouse game from the very beginning to see how far he could push me, and what my reactions might be so that he could gauge... how he would play me; where my levers were, what were my vulnerabilities".

Despite the meeting being uncomfortable for Melissa, she agreed to meet Weinstein at the Tribeca Grand Hotel again. She thought it would be safer as there would be people around. She presumed the deal would be closed in a restaurant/conference room. But, he took her to his hotel room and allegedly raped her. Both the allegations and the video are part of the lawsuit.

Weinstein's response
Defending Weinstein, his lawyer says nothing was 'forceful'

In light of the damning evidence, Weinstein's lawyer, Benjamin Barfman issued a statement. He said, "What they shared with us, when viewed in its entirety, in context and not in select excerpts, demonstrates that there is nothing forceful, but casual - if not awkward - flirting from both parties". Claiming that the video tried to malign Weinstein for financial gain, Barfman said facts mattered.

We may not have the entire video but we see Melissa's discomfort at Weinstein's behavior. Further, she couldn't leave because he had the financial power to make the deal happen. When a mogul meets a start-up's representative, there is already a power disparity. Exerting sexual dominance in such situations is unethical and exploitative. Women should not have to walk into business meetings fearing rape.