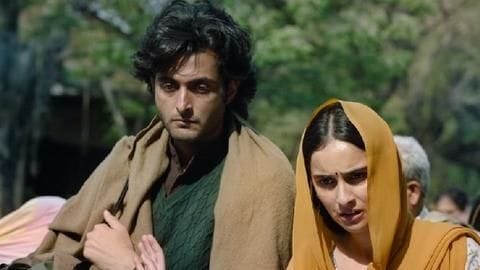 Almost three decades back, India witnessed one of the biggest mass human exoduses in its independent history - the 1989-1990 forced exodus of Kashmir Pandits. The infamous exodus, which has hardly been covered by mainstream Bollywood, is today brought alive by the trailer of Vidhu Vinod Chopra's much-awaited comeback film Shikara. Here, we dissect the trailer.

Plot
The story follows a Kashmiri married couple through the exodus

The trailer of Shikara - The Untold Story of Kashmiri Pandits opens in the year 1990. Evidently, the story of the upcoming movie revolves around a Kashmiri married couple Shanti and Shiv Kumar as they deal with the atrocities and aftermath of the violent exodus of Hindus from the Valley. The film follows their story over the course of 30 years.

The romantic drama film brings two newcomers to the fore - Sadia (playing Shanti) and Aadil Khan (playing Shiv). The duo, portraying victims of the harrowing exodus in their debut feature, look refreshing and promising in the trailer.

For the unversed, the Hindus residing in the Valley were forced to flee the area after being targeted by militant groups and Kashmiri insurgents such as the Jammu Kashmir Liberation Front (JKLF) during 1989 and 1990. Reportedly, over 200 people were killed and thousands had to evacuate the Valley, during the exodus. Most families were forced to shift to Jammu, Delhi-NCR, other neighboring states.

Shikara has been directed and produced by Vidhu Vinod Chopra. It marks Chopra's long-pending Bollywood directorial return after Eklavya: The Royal Guard (2007). His 2015 English-language film Broken Horses was a box-office bomb. The screenplay is by Chopra, Rahul Pandita, and Abhijat Joshi. The music of the film is composed by veteran AR Rahman and his award-winning music ensemble Qutub-e-Kripa.

Information
'Shikara' to release on February 7

Shikara is set to hit the theaters on February 7. It will clash with Mohit Suri's action thriller film Malang, which stars Aditya Roy Kapur, Disha Patani, Anil Kapoor and Kunal Kemmu, among others. The trailer of Malang came out yesterday.