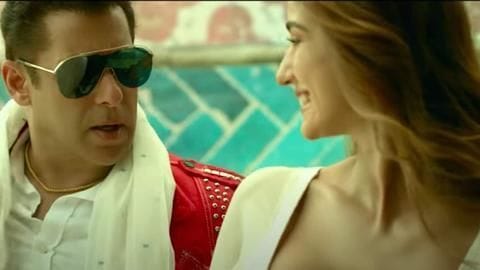 Salman Khan is ready to greet fans after a long time, with Radhe: Your Most Wanted Bhai releasing on May 13. Just days ahead of its premiere, makers have released another song from the film, titled Zoom Zoom. A preppy romantic number, the song that dropped today features Khan moving to the beats along with female lead Disha Patani. Here is our review.

Credits
The track has been composed by Sajid-Wajid

The music video features Khan in a racer avatar, as he sings about falling in love. Patani looks fantastic as always, but there is nothing more to it. Inching a little over two minutes, the song is short and crisp, possibly the most melodious track we have gotten from Radhe till now. Composed by Sajid-Wajid, Ash King and Iulia Vantur are the singers.

Mixed experience
The catchy music invites you, but visuals disappoint

The intro music is catchy and immediately taps listeners in. What makes it less enjoyable though is the visual component. Khan attempts to bring to life his characteristic swag, but the 55-year-old ends up looking tired and out of energy. His movements don't match the beat early on in the song, and it's a puzzle why it was not edited to be in sync.

There is also a new Khan-special hook step in Zoom Zoom, which is weird but comes with a mass appeal. Patani, like the other songs Seeti Maar and Radhe - Title Track, is seen either smiling or carrying no expressions on her face. Caesar Gonsalves is the director of the choreography, and the overall package is generic, basically nothing we have not seen before.

Summing up
Khan no longer blends with co-stars half his age!

Sorry fans, but Khan is aging and he no longer blends with co-actors half his age. In summary, Zoom Zoom is a marked improvement from the other three releases, but it still does not reach the outstanding zone. As per the trailer, Bhai will play a vigilante in Radhe and save the city from evil goons. Let us hope the movie doesn't disappoint!