Salman promises explosive action in 'Radhe: Your Most Wanted Bhai' 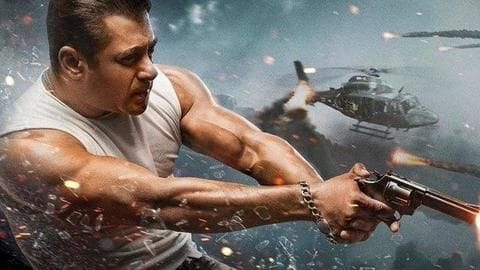 After a long wait, Salman Khan treated his ardent fans with the trailer of Radhe: Your Most Wanted Bhai today. The action-packed trailer of the Prabhu Deva-directorial features bombastic combat scenes, with a hint of romance between Khan's and Disha Patani's characters. Some hours before it dropped, the makers released a poster, which had Salman in his Wanted avatar, and him with his gang.

Trailer
The rogue cop is here to 'clean the city'

The trailer starts with Salman's character, a policeman, going after villain Randeep Hooda. The 55-year-old mouths a famous dialogue from Wanted, and also emphasizes that he's there to "clean the city." The trailer ends with him saying, "Eid Mubarak," a nod to his hit Eid releases. Amid all this, did we catch Salman kissing Patani, his first-ever liplock or was that just a peck?

Interestingly, Team Radhe will be releasing the action-packed project simultaneously in the theaters as well as pay-per-view services and DTH channels. While this scenario is commonplace in foreign industries, Radhe will become the first major Bollywood film to do so. People can either opt to hit the cinema halls or watch it on ZEE5 using the network's pay-per-view service ZEEPLEX.

Options
'Sooryavanshi', '83' could follow the path set by 'Radhe'

It is expected that others like Rohit Shetty's cop drama Sooryavanshi, starring Akshay Kumar and Katrina Kaif, and Kabir Khan's 83, starring Ranveer Singh as Kapil Dev, will pick that trend. Trade analyst Sumit Kadel observed that there will be "5-8 (other) major Bollywood films" that will opt for the hybrid release model. "You'll hear many announcements towards first week of May," he said.

Film
'Radhe' is the first Sajid-Wajid project after Wajid's demise

Back to Radhe, it's said to be inspired by the South Korean movie The Outlaws. It also stars Jackie Shroff and Megha Akash. The movie has Sajid-Wajid as its music composers. It has two songs directed by the duo, making it the first album to release after Wajid's demise carrying their label. As per reports, Radhe is believed to have five songs.