'Radhe' music review: So bad you'll regret listening to it 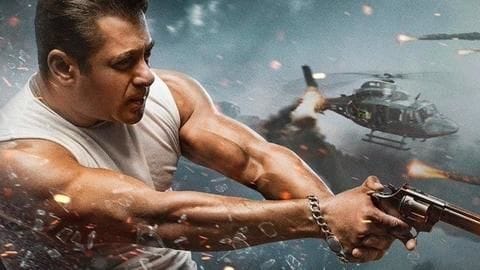 After two songs, Seeti Maar and Dil De Diya, makers of Salman Khan's much-anticipated film Radhe: Your Most Wanted Bhai released the title track today. The title track features Khan alongside the lead of the film, Disha Patani. The film will be hitting the theaters, while simultaneously available for pay-per-view on ZEEPLEX on May 13. Here, we review its music.

In this article
Review

The title track, composed by Sajid-Wajid and sung by Sajid Khan, sounds exactly like many songs from Khan's films we have already been subjected to. The lyrics, at times, are hard to comprehend and stop making sense after a while. Seeing Khan trying to move to the beats, but failing, probably owing to his age is a torture. The song is a monstrosity. Period.

The video beats the music in mediocrity

When it's a high budget production with big names, you would expect the CGI to be good, but the makers probably thought, no one would see anything beyond 'bhai'. There are bullets raining over Khan, who looks so tired that he would ask for a chair and sit down anytime. Patani tries to salvage, but lack of any expression on her face doesn't help.

Seeti Maar, which was the first video from Radhe's album to be released, is a rehash of a hit Telugu song featuring Allu Arjun and Pooja Hegde. Arjun moves like a dream. His expressions and overall swag? Breathtaking! You end up grooving even if you don't understand the lyrics. Khan, on the other hand, barely moves and feels like he is due for retirement.

In all, 'Dil De Diya' seems like a saving grace

The second song to be released from the album was Dil De Diya. Composed by Himesh Reshammiya, it has Jacqueline Fernandez dancing alongside Khan. Even though the tune seems to be inspired from the retro song by the same name, Fernandez's dance moves prove to be a saving grace for this song. Khan is also bearable here, as he does his signature freestyle moves.