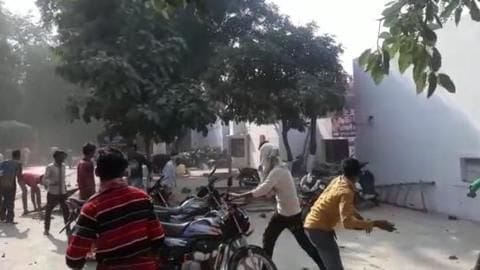 A disturbing video shows a frenzied mob yelling 'maaro, maaro' and 'take his gun', has emerged in the Bulandshahr violence which killed one police inspector and another youth. The deaths of inspector Subodh Singh and youth identified as Sumit Kumar could be linked, the video suggests. It also hinted Sumit wasn't a bystander, as his family claimed, but was part of the mob.

On Monday, clashes between right-wing groups and police personnel over alleged cow-slaughter escalated, with the former attacking the latter. While the protesters pelted stones, police opened fire to contain the violence. In the violence, Singh and Sumit lost their lives. It is also understood that mob blocked vehicle which was taking Singh to the hospital. The inspector was shot dead, reports claimed.

Sumit was part of mob that attacked police

The video paints a clearer picture of the violence. It purportedly shows Sumit getting a chest wound. It also shows Sumit was part of the mob and was pelting stones at the police personnel. Two men helped Sumit. A few seconds later, the mob advanced toward the field. A constable can be seen holding a gun and the video taker shouted 'take the gun'.

The video ends with Singh lying on the ground. Singh's driver told police they were cornered by the mob. Just as he was taking the slain officer to the hospital, the mob caught up with them and shot him. The mob was allegedly led by Yogesh Raj, a member of Bajrang Dal. Though police have arrested five in the connection, Yogesh is at large.

Notably, Yogesh released a video claiming he was innocent. He claimed he was not present where carcasses of cows were found, and intended to settle the matter in a 'peaceful manner'. His words contradict his earlier complaint, where he told police he saw seven people slaughtering cows. He complained on Monday. "Our Hindu sentiments have been hurt," the FIR based on his complaint read.

Why would we create a riot-like situation, asks Yogesh

In the video, Yogesh claimed he was sitting at Siyana police station when he learned villagers pelted stones and firing took place. "Since our demand of an FIR was being fulfilled, why would us, Bajrang Dal people, cause a riot-like situation? I have nothing to do with the second incident," he said in the video. A Bajrang Dal member claimed Yogesh was being framed.

Here is the video

Absconding main accused, Yogesh Raj, uploads his statement on social media. Claims he or other Bajrang Dal activists, had nothing to do with the violence in the aftermath of the protests. #BulandshahrViolence pic.twitter.com/RrnFRLNUQ1