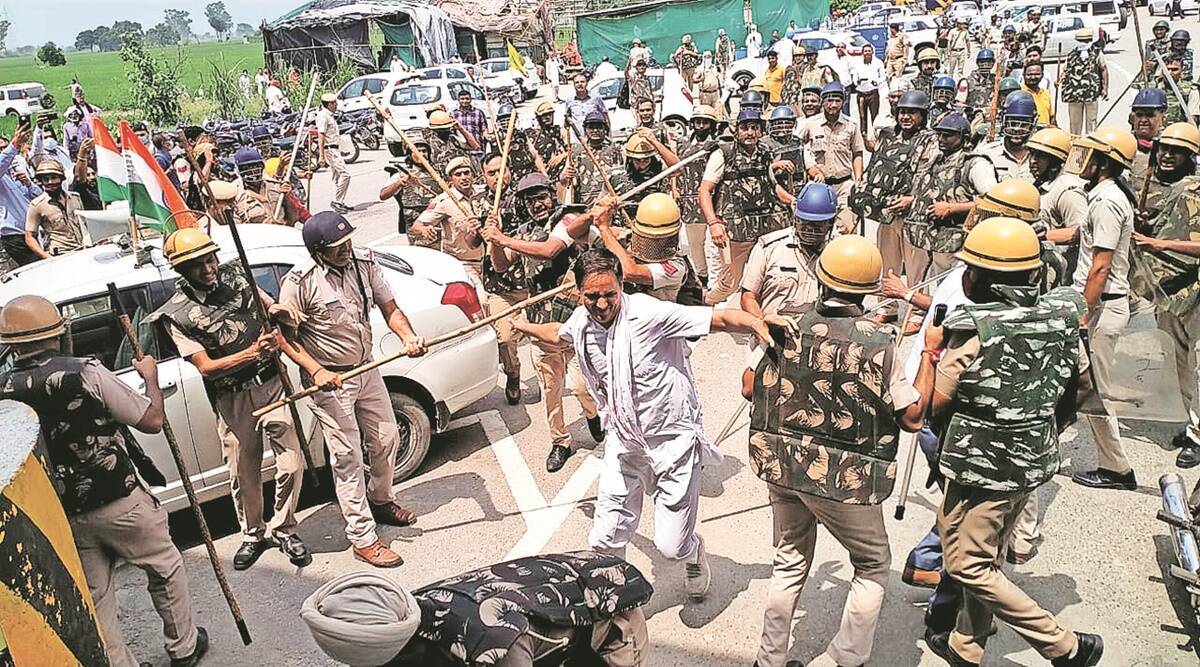 The government has assured farmers that two family members of Sushil Kajal, the farmer who died after the August 28 incident, will be given a job.

After Saturday's meeting, farmers' leader Gurnam Singh Chadhuni and senior IAS officer Devender Singh held a joint press conference. "The state government has accepted our demand," Chadhuni said. "We have decided to call off the protest."

The inquiry will be conducted by a retired session judge, who will look into former SDM Ayush Sinha’s role in the incident.

The Haryana government has ordered a probe into last month's clash between farmers and police. The IAS officer in question has been sent on leave.

Haryana Home Minister Anil Vij had said on Thursday that the government will “impartially” probe the entire Karnal lathicharge episode but added that "only genuine demands will be met."

Farm union leaders and the Karnal district administration will hold another round of talks today, with both sides hoping for an early resolution of issues after a four-hour-long marathon meeting on Friday.

"We are ready for an impartial probe, but this will not only be related to (former Karnal) SDM (Ayush Sinha) but the entire Karnal episode. In this (probe), if farmers or their leaders are found guilty, then whatever action is deemed fit will be taken," Vij told reporters in Ambala.

Haryana Home Minister Anil Vij has said the government is ready for a probe into the "entire Karnal episode", including an IAS officer's controversial remarks and a police lathi charge on farmers.

Ban on all kinds of internet services in Karnal has been extended till Thursday midnight.

Rakesh Tikait has said that they will build a protest similar to the agitation sites outside Delhi if the government didn’t meet their demands linked to the lathi charge.

The Shiromani Gurdwara Parbandhak Committee will provide 'langar' (free food) and other required services to protesting farmers. SGPC president Bibi Jagir Kaur said the organization is fully supportive of the farmers' agitation at Karnal and will provide them every kind of service according to their requirements.

The second round of talks between the Karnal administration and farmer leaders have also failed. BKU leader Rakesh Tikait said the administration is not ready to take any action against officials responsible for the August 28 lathi charge.

BJP MP from Uttar Pradesh's Ballia, Virendra Singh Mast, has said the government will not withdraw the three farm legislations. The laws were not made to be withdrawn later, he said.

After talks failed yesterday, the Karnal administration has once again invited the farmer leaders for talks.

Keeping the tense situation in Karnal in mind, the Haryana government has extended the ban on mobile internet and SMS services.

A large number of farmers are sitting outside the gates of the district headquarters in Karnal demanding action against IAS officer Ayush Sinha, who ordered a police lathi charge on a group of farmers last month.

Addressing the farmers in Karnal, BKU leader Rakesh Tikait has said that he will meet the farmers to decide the future course of action. "The administration has tried to give an explanation of SDM's earlier action. We will hold a meeting with farmers to make a decision on our further actions," he said.