The Tripura CM makes yet another faux pas. After calling Diana Hayden unworthy of her Miss World 1997 crown and suggesting that internet was used even during Mahabharata, Biplab Deb courted fresh controversy on Sunday. At a Tripura Veterinary Council seminar, Deb said it would serve youngsters better to set up a paan shop or milk cows instead of running behind politicians for jobs.

"The youth wastes vital time of their life running after political parties to get a government job. If they had set up a paan shop instead, they would have had a bank balance of Rs. 5 lakh by now," he told Indian Express. Deb urged educated youth to seek self-employment under the Pradhan Mantri Mudra Yojana instead of pestering the politicos for government jobs.

Deb said the youth was unemployed not because of no work but because of petty worldview like "a graduate cannot opt for farming, start poultry or piggery because if he does so, his class will go down". Interestingly, job creation was one of the key agendas of Deb's election manifesto. Less than two months in office, and he's already turned the tables.

Bizarreness overload
Mechanical engineers, you're not good enough for UPSC 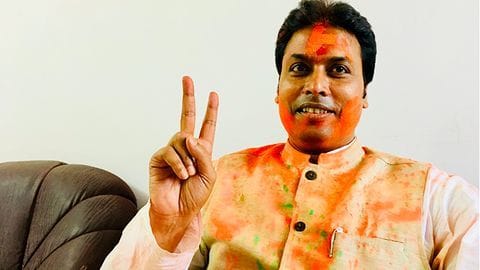 This is not it. The newly-appointed chief minister gave another so-bizarre-you'd-want-to-pull-your-hair suggestion. He said mechanical engineers shouldn't take the UPSC exams since civil engineers are more suited for the job. How, you ask? Because "society has to be built up and only civil engineers have this knowledge". And here you were thinking it couldn't get worse than the internet or the Diana Hayden remark.