In yet another incident highlighting the poor execution of the nationwide lockdown, a video showing a man feeding on an animal carcass on the Delhi-Jaipur Highway has emerged online. The video has sparked outrage online. Since India was locked down on March 25, the poor have suffered job losses, starvation, and apathy, heaped on top of the dangers of the coronavirus outbreak. 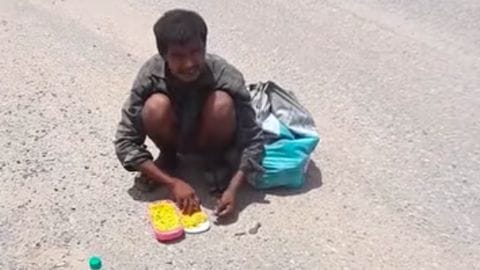 The video was posted online by Pradhuman Singh Naruka, a resident of Jaipur, Rajasthan. In the video, Naruka asks a man what he was eating as the latter fed on the roadkill. He then asks the man to move to a spot and offered him food. In the caption posted along with the video on YouTube, Naruka mentioned the roadkill was a dog's carcass.

Details
Incident occurred near Shahpura on May 18, says Naruka

Naruka told THE WEEK the incident occurred on May 18 near Shahpura. He said the man was possibly a homeless person. He also said that the police had approached him on Thursday, asking details about the man. In a Facebook post dated May 19, Naruka noted, "No person stopped their vehicle and felt the need to help him," requesting others to help those starving.

Reaction
Here's how people reacted to the video

As the video went viral, people expressed their anger over the incident and praised Naruka for choosing to help another person in need. Meanwhile, National Social Media Coordinator of Mahila Congress Lavanya Ballal slammed the government over the incident. "This is beyond heartbreaking. No one deserves this," Ballal wrote, "Narendra Modi, India won't forget this amount of pain and humiliation heaped of the poor..."

This is beyond heartbreaking. No one deserves this
He is eating the carcass of a dead dog.@narendramodi India won’t forget this amount of pain and humiliation heaped of the poor #ShamelessBJP pic.twitter.com/NifOFgzAbQ

Since the lockdown was enforced on March 25, lakhs of migrant workers across the nation were rendered jobless. Many were evicted from their homes. Penniless and facing a travel shutdown, lakhs of poor migrants chose to walk hundreds of kilometers to return to their homes in their native states. Hundreds have reportedly died due to accidents or sheer exhaustion during their journeys.

Information
Migrants were allowed to return home earlier in May

Earlier this month, the government finally allowed the inter-state movement of migrants via buses and trains. However, despite the government's claims that the migrants were not supposed to be charged, many of them were made to pay, sometimes twice or thrice the travel fare.

Quote
'India's workforce in throes of rage and anxiety'

Recently, journalist Barkha Dutt, who has been reporting from the ground for around 60 days, wrote in Hindustan Times, "India's workforce is in the throes of rage and anxiety," blaming the government's "zillion flip flops" on migrant workers. "India is in the grip of a humanitarian crisis," she wrote, urging the government to lift the nationwide lockdown.