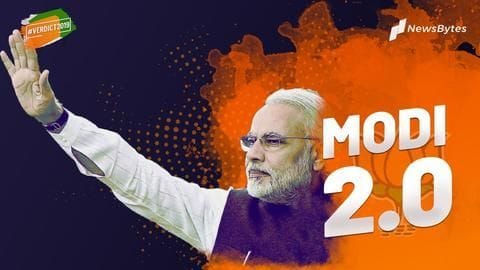 While the Bharatiya Janata Party (BJP) is headed for a landslide victory in 2019 Lok Sabha elections, PM Narendra Modi has given his first speech since being voted back to power. Expressing his gratitude to the people, PM Modi said the people's mandate in the 2019 elections is the one for a "New India". Here are some highlights from his address at BJP's headquarters.

Thank you India! Watch from the BJP Headquarters. https://t.co/6WTN8almav

Details
PM Modi thanked people for having faith in NDA

PM Modi, who is set to return to power with a thumping majority, earlier thanked voters for having faith in the National Democratic Alliance (NDA) and bringing them back to power. Apart from BJP chief Amit Shah, Union Ministers Rajnath Singh, Sushma Swaraj, and JP Nadda and former Madhya Pradesh CM Shivraj Singh Chouhan are also present at the BJP headquarters.

On Victory
Victory will be an inspiration for generations: PM Modi

Quote
PM Modi attributes the party's success to the people

Attributing BJP's success to the people, PM Modi said, "This is the victory of the farmers of India, who stay hungry to feed the people of this country. This is a victory of middle-class families, who are honest taxpayers, but...never respected for contributing to nation-building."

Message to states
Centre will stand shoulder-to-shoulder with states in their progress: Modi

PM Modi also congratulated all the candidates who emerged victorious, irrespective of their political party and the region they contested from. He said, "The BJP submits itself to the Constitution of India and stands by federalism." "I promise all states that the Centre will stand shoulder-to-shoulder in your journey of progress," the Prime Minister added.

Statement
Only government, which has never been marred with corruption: Modi

"Three things [were] constant in the history of politics in India — [fake] secularism, inflation, corruption — all of which were absent from this election. This has been the only government, which has never been marred with corruption," claimed PM Modi. "Not one political party has been able to deceive the people of India by wearing the label of [fake] 'Secularism'," he said.

PM Modi said that people trusted him in 2014 even when they didn't know him much. Thanking the people, he said they have strengthened their trust in him by voting him to power in 2019 again. "With great power comes great responsibility... Every single second of my time and every inch of my body is for the people of this nation," he added.

"I promise not to act out of malice or ill-intention... Every cell in my body is dedicated to the nation. I may commit a mistake, for which you can criticize me. I can make mistakes...but my intentions are never bad," said PM Modi.

BJP President Shah, who is set to make his Lok Sabha debut after a record win from Gujarat's Gandhinagar, has also addressed the gathering at the BJP headquarters. He thanked the voters for "reposing their faith" in the PM Modi and the BJP. He said that the BJP's victory is a testament to the party's aim and the Modi government's inclusive development-focused policies.

Quote
This is a historic victory, says Shah

Shah said that the Modi-led government has achieved a historic feat by being elected twice with full majority. "This is a historic victory. After 50 years, someone has won an absolute majority for the second time in a row," he said.