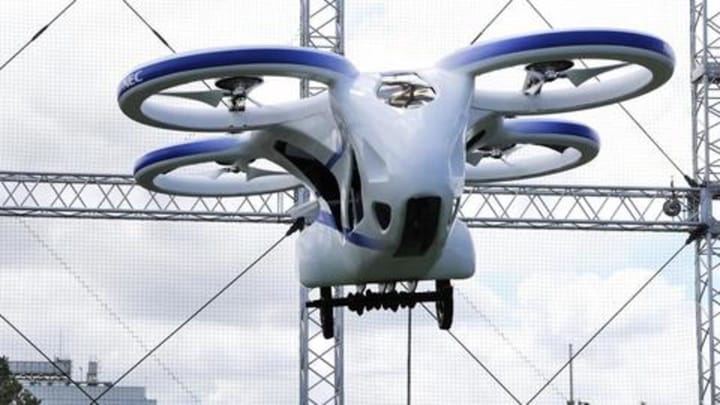 Thanks to the attention of technology and aerospace giants, flying taxis are the rage these days. From Airbus to Uber, several companies have invested in Vertical and/or short Take-off and Landing (VTOL) technologies to build flight-capable passenger vehicles and alleviate the problem of road congestion. Japan too is engaged in this effort and has now conducted the first test flight of its flying taxi.

Just recently, Japanese IT giant NEC Corporation conducted a flight demo of a passenger quadcopter. The vehicle was put inside a cage at a test facility in Abiko, a Tokyo suburb, and allowed to fly up to an altitude of 10 feet. It performed just as expected, lifting off vertically and hovering in the air for about a minute before returning to the ground.

No passengers were on board during test flight

While the test, which was the first for a Japanese corporation, was successful, it doesn't replicate the exact case of full-fledged flight. For that to happen, NEC Corporation would have to scale up the flight altitude of the vehicle as well as get a test passenger or perhaps a dummy on board. Hopefully, the tests will eventually expand to that point in the future.

"Japan is a densely populated country and that means flying cars could greatly alleviate the burden on road traffic," Okada told Bloomberg, noting that "we are positioning ourselves as an enabler for air mobility, providing location data and building communications infrastructure for flying cars."

Though Japan hopes to begin deliveries of VTOL vehicles around 2023, NEC Corporation's partner Cartivator targets to initiate mass production in 2026. They already have the Japanese government's permit to initiate outdoor flights, but they'd have to cut the weight of the vehicle before moving ahead. Currently, it weighs 150kg and can easily cross the 'safe weight' threshold with a few people on board.

As Japan and NEC move ahead with passenger drone's development and testing, companies in America and China also continue to focus on the flying taxi project. This includes a number of popular names in the aerospace industry, including Google's Larry Page's Cora air-taxi, Uber's Elevate, Boeing, and Airbus, which is working on a flying taxi called Vahana.