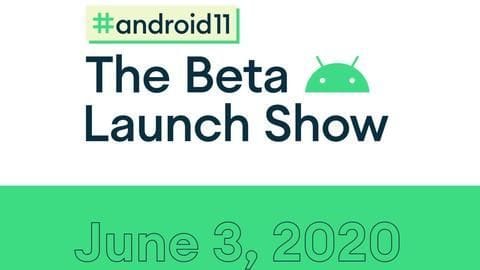 Every year in May, Google hosts the I/O developer conference to unveil new software and hardware products. The event is one of the most-anticipated ones from the company, but this time around, there was no I/O and no new launches, due to the COVID-19 crisis. Now, to make up for it, Google has announced a new event. Here's all about it.

In a recent blog post, Google announced an online developer event called "Android 11: The Beta Launch Show". It is slated to take place on June 3, giving the internet giant an opportunity to showcase the first public beta of the next big version of Android and the fancy new capabilities it has on offer for smartphone users around the world.

Originally, Google was supposed to launch the public beta of Android 11 at I/O 2020 scheduled for May 12. But, the event was canceled due to COVID-19, creating questions around the beta schedule. The company initially said it would keep the release on time, but then pushed the roll-out a month back, with the Beta show now serving as a stand-in.

In addition to moving the beta launch schedule back, Google is also releasing a fourth, previously unscheduled Developer Preview of Android 11 to fill the gap of May. Android VP David Burke says that introducing the fourth DP and moving the beta release up by a month "gives everyone a bit more room but keeps us on track for final release later in Q3."

Information
When Google will release final, stable build of Android 11

The Beta 1 scheduled for June will be followed by Beta 2 (for reaching platform stability) and Beta 3 (for final testing) in July and August, respectively. You can expect the final release somewhere around September. To recall, Android 10 was launched on September 3.

Event details
What else to expect from the June event?

The June 3 event will feature keynotes from Burke and Stephanie Cuthbertson, Android Senior Director of Product Management. Plus, there will be a live Q&A session as well as several developer-centric talks which were "originally planned for Google I/O" and will revolve around topics like Android Studio, and Google Play. The event will kick off at 11:00 am EDT.

Along with this, Google has also scheduled a three-day digital conference, from June 30 to July 2, to bring web developers together to learn about the latest, most helpful updates to Google Search, Chrome, modern web techniques, and more.