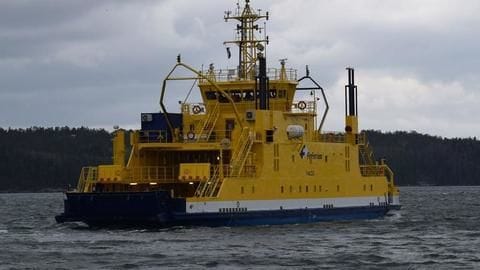 Self-navigating cars are the future, there's no doubt about that. But, renowned giant Rolls-Royce is taking the game of autonomous systems a step ahead and making self-navigating ships. The idea sounds a bit far-fetched, but it is happening for real, and the company has even conducted a voyage with what it calls the world's first fully autonomous ferry. Here's more on the trip.

Earlier this month, Rolls-Royce conducted a demonstration of Falco, world's first self-navigating ferry, with some 80 VIPs onboard. The 54-meter double-ended ferry, run by Finnish operator Finferries, has been enhanced with Rolls-Royce's Ship Intelligence technologies. This includes a range of sensors, cameras, and an artificial intelligence system that allow the ship to produce a detailed picture of its surroundings and navigate accordingly.

In the voyage conducted near the Finnish city of Turku, west of Helsinki, Falco sailed from Parainen municipality to Nauvo without human intervention. It navigated autonomously, avoided collisions on the outward journey, while during the return, a sailor sitting some 50km away, took control and operated the whole thing remotely - to show its remote control capabilities.

Autodocking
Also, Falco docked on its own

Autodocking is probably one of the most interesting capabilities demonstrated by Rolls-Royce in this trip. With this, the ship automatically adjusts its course and speed when approaching near the quay and docks without requiring human intervention at any step. Notably, when the ship operates autonomously, its situational awareness information is relayed to the captain on the ground. He can take control anytime.

Falco is being tested rigorously and has clocked nearly 400 hours of autonomous operations, including collision avoidance, in minor tests. "Today marks a huge step forward in the journey towards autonomous shipping and reaffirms exactly what we have been saying for several years, that autonomous shipping will happen," Rolls-Royce President Mikael Makinen said, noting that the technology will "change shipping as we know it".

With these tests and demonstrations, Rolls-Royce wants to mature autonomous shipping to the level at which self-navigating ships can commercially operate in the high seas. This, as per Digital Trends, may happen by 2025.