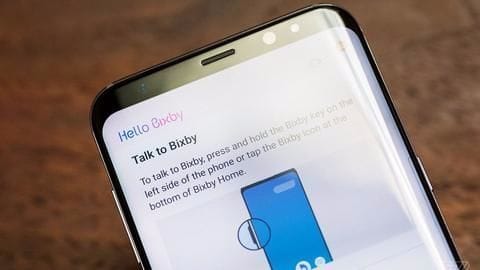 Much to the excitement of fans, Bixby, Samsung's answer to Apple's Siri, was launched in India yesterday. What's more, it has been customized for Indian accents! You can activate Bixby by simply pressing the dedicated button or saying 'Hi Bixby'. Bixby can launch multiple apps and actions with simple voice commands. Find out all about it!

Functionalities
What all can Bixby do?

Bixby offers four essential facilities: the ability to talk, letting it make sense of pictures, using it to set reminders and receiving customized recommendations. The "Quick Commands" feature even allows you to create shorter custom commands in place of a sequence of commands. Eg, you can create "good night" to mean "Turn on Do-not-disturb mode, set an alarm for 6:00 AM and turn on blue light filter".

Information
On which phones is it available?

Bixby has faced criticism: users were unhappy Samsung didn't allow them to customize the button. Samsung even blocked third-party apps from unlocking it. The company has finally released an update allowing users to disable it. Moreover, its limited target audience is sure to act as a roadblock, particularly when rivals Apple and Amazon are going all out to expand the reach of their products.

Do you know?
Gadget freaks in India have much to look forward to

In the last months of 2017, Apple will bring out its latest OS, the iOS 11, which will have diction support for local languages including Hindi. Meanwhile, Amazon will introduce Alexa with Echo Dot smart speaker, the best-selling Alexa device since its debut.