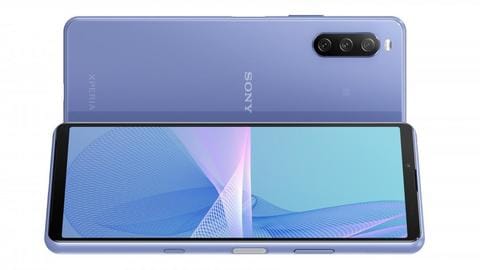 Alongside the flagships Xperia 1 III and Xperia 5 III, Japanese tech giant Sony has also announced a mid-segment smartphone, the Xperia 10 III (pronounced as Xperia 10 Mark 3). As for the key highlights, the handset offers an OLED display, triple rear cameras, a Snapdragon 690 chipset, and 5G network connectivity. Here are more details.

The Sony Xperia 10 III features a conventional rectangular screen with noticeable top and bottom bezels, an IP65/68-rated build quality, and a side-mounted fingerprint sensor. The handset bears a 6.0-inch Full-HD+ (1080x2520 pixels) OLED HDR screen with an aspect ratio of 21:9, a 120Hz touch sampling rate, and 10-bit tonal gradation. It is offered in Black, White, Blue, and Pink color options.

The Sony Xperia 10 III is powered by a Snapdragon 690 processor, paired with 6GB of RAM and 128GB of expandable storage. It boots Android 11 and packs a 4,500mAh battery with 18W fast-charging support. The device is equipped with a headphone jack with LDAC and Hi-Res audio support, DSEE Ultimate, and stereo recording along with connectivity options like dual-band Wi-Fi and Bluetooth 5.1.

Sony is yet to announce the pricing details of the Xperia 10 III. However, the handset, just like the Xperia 1 III and Xperia 5 III, will be made available in "early summer" which starts from June in Japan.