LEGO just made a drivable Bugatti with a million pieces 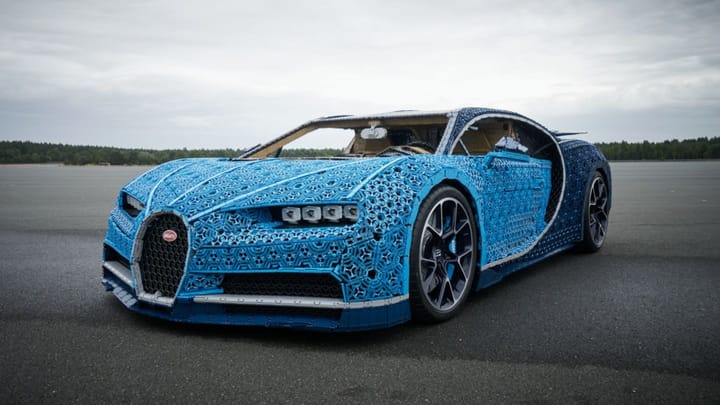 Ever since the introduction of LEGO in 1949, the world has seen its share of outrageous creations. Now, in what is perhaps the most outrageous LEGO creation ever made, the company has built a full-size Bugatti Chiron that can actually be driven. Yes, they built a super car out of a million LEGO pieces, and are driving around in it. Here's all about it.

Born out of the LEGO creative team's passion, the Bugatti Chiron was built in 13,400 hours, using over a million interlocking plastic LEGO Technic pieces. For those unaware, Technic is LEGO's line of interlocking gears, axles, rods etc., and are slightly more complex that the basic plastic building blocks the company is known for. Additionally, 2,304 tiny LEGO electric motors were also used.

Not a single drop of glue was used in construction

Surprisingly, unlike several other large LEGO master creations wherein glue is used to hold large models together, not a single drop of glue was used in the Chiron. However, to make the car drivable and capable of carrying enough weight, LEGO had to use a minimal steel frame, Bugatti wheels, and some non-LEGO parts for the drivetrain. Apart from these, it's all LEGO.

The car has several functional parts all made of LEGO

It's worth noting here that the LEGO Bugatti Chiron has several working parts - head and tail lamps, doors that close and open, and an entire interior, including the steering wheel, shifter, pedals, dashboard, and seats - all made of LEGO parts. Notably, even the Chiron's motor, its controllable spoiler, and even the speedometer are made of LEGO parts.

The LEGO-built motor that makes the Chiron move

Perhaps LEGO's most notable feat is the Chiron's engine. Using 2,304 electric Technic motors, 2,016 axle pieces, and 4,032 plastic gears, LEGO built a motor capable of generating 5.3 horsepower. Of course, while that's nowhere near as powerful as the original Chiron (which boasts 1,479 horsepower and 261mph top speed), it allows the LEGO Chiron to be driven at a top speed of 18mph.

The car made its debut at the Italian Grand Prix

The LEGO-built Bugatti Chiron had its first test-drive in June, and made its public debut on Thursday at the Monza racing circuit in Italy, just ahead of the Italian Grand Prix scheduled for the weekend. Understandably, there are no plans to bring LEGO-built Bugatti Chirons into production, but for what it's worth, this masterpiece is a mind-boggling demonstration of what LEGO pieces can do.