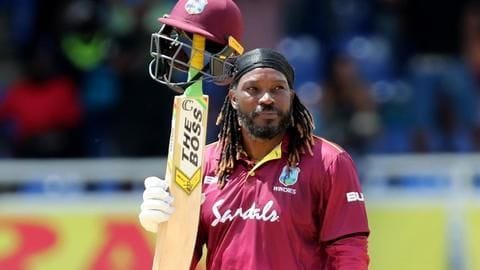 West Indies opener Chris Gayle has blamed his team-mate Ramnaresh Sarwan for his ouster from the Caribbean Premier League (CPL) franchise Jamaica Tallawahs. In a three-part YouTube video, the southpaw stated that he was undermined by several players and staff, the centre of them being Sarwan. He also revealed quite a few players were traumatized by Sarwan, who was Tallawahs' assistant coach.

"What transpired with the Tallahwahs, you had a big part to play. You are a snake, you are worse than the coronavirus right now, You aren't the most loved person in the Caribbean. You are so vindictive, you are immature, you are back-stabbing," Gayle said.

With Tallahwahs releasing Gayle, the southpaw has been signed up as a marquee player by St Lucia Zouks. He played the first four editions with Tallahwahs before moving to St Kitts and Nevis Patriots. Gayle was released by Patriots following the 2018 season. He was re-signed by Tallawahs ahead of last season for a three-year contract which came to a premature end.

Restrictions
Gayle opens up on how Sarwan imposed restrictions

Gayle went on to explain how Sarwan imposed restrictions on players during his stint. "The amount of lies this guy told. Sarwan wanted to put curfew on the players when the games were at 8 PM," he said. He added, "He wanted to know why there were so many Jamaicans on the team. You take it upon yourself and say too many Jamaicans."

Insecurities
People are insecure due to my progress: Chris Gayle

Hinting at Sarwan, Gayle reiterated that players of contemporary generation are wary of his progress after all these years. "Out of that era, I'm the only active player. I'm the last man standing. So it kind of hurt them to see Chris Gayle still playing and still being successful. I'm talking about past and present players. But I'm dealing with you Sarwan," he said.

Quote
Gayle said the incumbent generation of players is ungrateful

"Most of your career, I helped blossom it. It's respect and decency (that I ask for) but when some people get big for their shoes and forget where they are coming from, they get out of control, nobody can talk to them anymore," Gayle concluded.