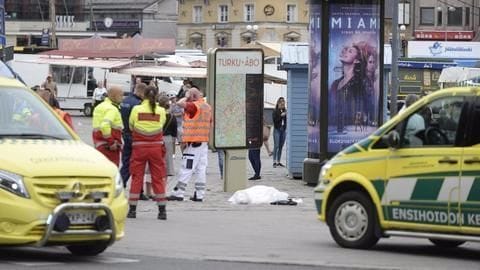 A knifeman who stabbed several people in the Puutori-Market Square of Finland's Turku city has been taken into custody by the police. The police reportedly shot the attacker in the leg. Though casualties haven't been confirmed, images of a dead body have surfaced. People have been warned by the police to avoid the city centre; some reports suggest that it is a terror attack.

Six people have reportedly been stabbed in the Puutori-Market Square area, including five women and a man. It is still unclear whether it is one attacker or multiple attackers armed with large knives that stabbed the people. Bystanders said many people, including a lady pushing a baby in a pram, were stabbed; they even heard gunshots after which the suspected assailant was arrested.

Security
Security at airport and train stations stepped up

Following the knife attacks, Finland Police have boosted the security at Helsinki Airport, local train stations, and other transport hubs. One witness claimed that he saw a man armed with knife run from one market square to another. Police reportedly said they are on the hunt for "several possible perpetrators"; they are carrying out checks on public transport.