How Bugatti managed to surpass the magic limit of 300mph 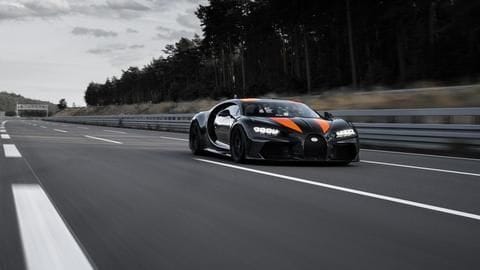 Just recently, at the 96km-long Ehra-Lessien test track in Germany's Lower Saxony, a specially-made Bugatti Chiron breached limits with a peak speed of 304.773 mph (490.484 km/hr), becoming the world's first hyper sports car to achieve this record. A lot went into surpassing the "magic limit" of 300mph, and today, we bring all the mind-numbing facts and figures behind the incredible feat. Buckle up!

Le Mans winner and Bugatti test driver Andy Wallace reached the top speed after the team conducted several speed tests over a week-long session. And on the record date, he just didn't go full-throttle. In fact, Wallace worked his way up to the top speed in 50 km/hr increments to ensure the car was optimally balanced before aiming for record speed.

After one lap to condition the Chiron, Wallace came out of the north curve of Ehra-Lessien at 200km/hr to reach the top speed on the 8.8km straight road. He said that he went full-throttle for nearly 70 seconds before decelerating back to 200 km/hr to drive through the south bend. And after hitting 490km/hr mark, he just had 2km distance to reduce the speed.

It's not the first time that British racer Wallace has set a speed record. In 1998, he reached a speed of 391km/hr (243mph), driving a McLaren F1 on the same track. However, breaching 300mph speed limit at the age of 58 is beyond commendable.

Now, the Bugatti Chiron that was used for the record packed a slightly more powerful version of the regular Chiron's quad-turbocharged 8-liter, W16 engine which was tuned to produce close to 1,600hp. The French automaker also introduced some aerodynamic improvements to chassis including a six-point belt system and an additional safety cell for Wallace. However, standard gearbox and the all-wheel-drive system were used.

Fact #4
The tires were X-rayed to check for flaws

At speeds of 490km/hr, the tires rotate upto 4,100 times in one minute. Hence, the Chiron was fitted with Michelin's high-speed Pilot Sport Cup 2 tires, that were reinforced with stronger metallic threads to handle a gravitational force of 5,300G. And before hitting the tarmac, they were tested at speeds of upto 511km/h and each tire was X-rayed to find any defects.

The Bugatti Chiron beat Koenigsegg's Agera RS (278mph) to become the world's fastest car. But it wasn't just about the extra 26mph. At these speeds, gaining even 1mph is huge and the forces acting on the car grow exponentially with the increase in speed. Hence, from improving aerodynamics to producing new tires to God-level driving, it took a lot.