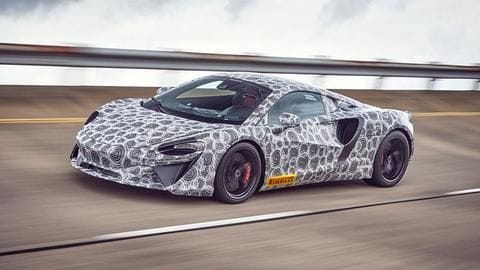 Prior to its global debut on February 17, British automaker McLaren has released a teaser video of its upcoming Artura hybrid supercar. As per the teaser, the vehicle will look similar to the 570S but with some design tweaks. It will pack a digital instrument cluster with multiple display modes and shall run on a V6 engine and an electric motor. Here's our roundup.

Exteriors
McLaren Artura: At a glance

The McLaren Artura will be based on the McLaren Carbon Lightweight Architecture (MCLA) and shall feature a sloping roofline, a muscular bonnet, sleek headlamps, and wide air vents. The supercar will be flanked by sleek ORVMs, fenders with wide air intakes, and designer alloy wheels. On the rear section, slim taillights, a large diffuser, a McLaren logo, and twin exhaust tips will be available.

The McLaren Artura will run on a twin-turbo V6 engine and an electric motor. The hybrid powertrain is rumored to deliver a power output of around 600hp to the rear wheels. The car should also offer a pure electric range of approximately 32km.

Interiors
A peek inside the cabin

Details pertaining to the interiors of the McLaren Artura are currently unavailable. However, it should have a 2-seater cabin with automatic climate control and a multifunctional power steering wheel. The car should pack a digital instrument cluster with multiple display modes and a touchscreen infotainment panel that supports the latest connectivity facilities. Passengers' safety should be ensured by multiple airbags and a 360-degree-view camera.

The pricing and availability details of the McLaren Artura will be revealed on February 17. However, it should carry a significant premium over the 570S, which begins at $1,92,500 (roughly Rs. 1.40 crore).