'Boomika' trailer: Aishwarya Rajesh's movie is going to be bone-chilling 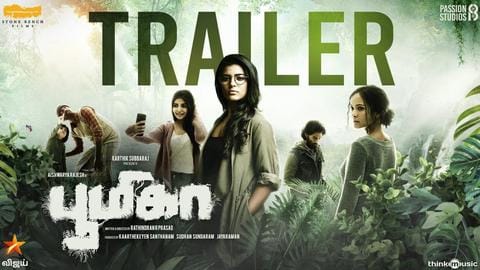 Trailer of Aishwarya Rajesh's horror-flick, Boomika, dropped recently. It revolves around a haunted campus, which is shown as a ground of several deaths. The spooky film is directed by Rathindran R Prasad, who has recently won hearts with his direction in Navarasa's Fear episode. Interestingly, the presenter of Boomika, Karthik Subbaraj, has also helmed one of Mani Ratnam's anthology series' portion — Peace.

What is the trailer all about?

The trailer begins with a foggy hill station, showing a cottage in the middle of nowhere. A child is then seen undergoing speech therapy. She stops speaking when the doctor asks her to say "Appa" (father). In the next shot, we see several bodies and hear a voiceover saying, "As far as I know, the property is abandoned for the past 8-10 years."

Trailer shows that the movie is your usual horror story

Rajesh, along with some friends, starts experiencing spooky incidents since their arrival at the cottage/campus. The intensity of this can be understood when she says, "Whatever is happening here is way beyond rational explanation." Also, the eerie background score, running on the hallways and investigation of the reason for the haunted campus give out all the elements of a usual yet interesting horror storyline.

Is the film all about 'nature' taking its revenge?

While the storyline doesn't seem extraordinary, the "ghost" makes it interesting. Although the trailer (available on YouTube) didn't reveal the mystery, the movie's title and poster indicate that "nature" will take its revenge. Will the forest be giving back to those who tried to destroy it? The poster shows Rajesh as a tree and the title is designed with branches, leaves and birds around.

Take a look at the poster of 'Boomika'

'Boomika' to premiere on Vijay TV on August 22

Apart from Rajesh, the upcoming horror drama also stars Vidhu, Pavel Navageethan, Madhuri, Surya Ganapathy, Ayaan Abhishek and Avantika Vandanapu. Produced by Kaarthekeyen Santhanam, Sudhan Sundaram and Jayaraman, Boomika has Roberto Zazzara as the cinematographer and Prithvi Chandrasekhar as the music composer. The movie is set to premiere directly on Vijay TV on August 22. Later, it will be available on the OTT platform.

The trailer was shared by Tamil actor Karthi online

Are Indian vaccines effective against Omicron? Here's what manufacturers say

'Seetimarr' trailer: It is all about women empowerment and kabaddi

'Navarasa' anthology review: Some shorts achieve brilliance, some are average

'Maradona' trailer: The rise and fall of legendary Argentine footballer