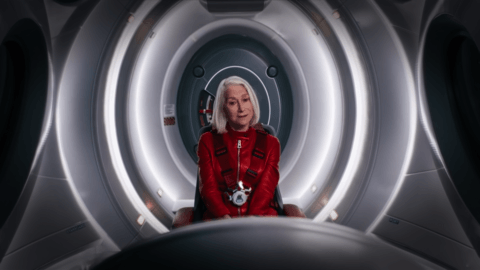 Amazon Prime Video just released a trailer of Solos, their star-studded sci-fi anthology series. It premieres on May 21 this year in the US and select countries, and on June 25 worldwide. The seven-part original has been created by David Weil and takes a closer look at how connected humans are to each other. It sure will give you Black Mirror vibes all the way!

Cast
'Memory isn't simply a thing you have. It's a promise'

The trailer starts with a close-up shot of legendary actress Dame Helen Mirren. We see her floating around in space in a shuttle among twinkling stars. "A memory isn't simply a thing you have. It's a promise," Morgan Freeman starts saying in his goosebumps-inducing voice, breaking the visual intrigue. He portrays a character named Stuart, who is supposedly battling Alzheimer's in the show.

The expansive sound design commands attention and hooks you right in. The trailer then takes us to quick montages of the show's stacked star cast, each alone in their own different-looking environment. Apart from Freeman and Mirren, Anne Hathaway, Uzo Aduba, Anthony Mackie, Constance Wu, Dan Stevens, and Nicole Beharie also star in Solos. Hathaway's "Hello," told in two different situations, stays with you!

Creator's cut
'Solos' cast has 'some of the most masterful actors': Weil

While Freeman plays Stuart, Hathaway portrays Leah, a gifted scientist, who discovers time travel. Zach Braff directs her portion. Mirren's story about Peg gets directed by Sam Taylor-Johnson. Meanwhile, Weil expressed his excitement for getting a chance to work with "some of the most masterful actors [to] have been on screen ever." "It will be unlike anything they've ever done before," he added.

Humanity
What it means to be human? Amazon's pertinent question strikes

Notably, Solos was greenlit by Amazon back in October 2020. Most of the show was shot in Manhattan Beach, California, by the end of last year. Amazon describes the series as "strange, beautiful, heartbreaking, hilarious, and wondrous." In the end, the question emerges: "What it means to be human?" Considering the current pandemic situation, many would relate to the show's seemingly isolated moments.