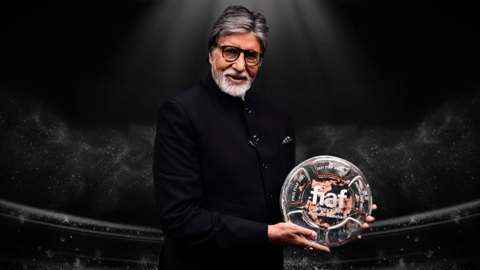 Bollywood legend Amitabh Bachchan was honored with an international award on Friday. He received the International Federation of Film Archives (FIAF) Film Award 2021, for his contribution to preserving the rich heritage of Indian cinema, from luminary figures of Hollywood — Martin Scorsese and Christopher Nolan. As he became the first recipient of the award in India, Big B hailed modern technology.

Established in Paris in 1938, FIAF rescues, collects, preserves, and screens moving images, which are revered in the field of art. The Indian icon was nominated by the FIAF-affiliate Film Heritage Foundation, which was founded by filmmaker and archivist Shivendra Singh Dungarpur. Bachchan praised Dungarpur, writing in his blog that he has "tirelessly and with immense determination pursued this very vital exercise."

Bachchan was all praises for Dungarpur

"The technical expertise being deployed by the Heritage Foundation through the arduous efforts of Mr. Shivendra Singh (Dungarpur), in reliving those iconic films and bringing them back to almost normalcy has been most laudable," he penned.

Separately, on social media, Bachchan penned his feelings, expressing how it was a huge honor to receive the international award. "Deeply honored to have been conferred the 2021 FIAF Award. Thank you FIAF, Martin Scorsese, Christopher Nolan for bestowing the award on me in the ceremony today, (sic)" he tweeted. The presentation ceremony took place on Friday, with Nolan and Scorsese joining virtually.

T 3847 -
Deeply honoured to have been conferred the 2021 FIAF Award. Thank you FIAF, Martin Scorsese , Christopher Nolan for bestowing the award on me in the ceremony today.
Modern technology be praised. Connected virtually to rest of the World simultaneously .. 🙏🇮🇳 pic.twitter.com/a6rf5IQG2Q

Scorsese and Nolan have been past recipients

Scorsese, the first recipient of the award in 2001, spoke about Bachchan's efforts in the field. He said that he followed the "growth of the preservation movement in India" and knew how "personally devoted" Bachchan is. He called Big B a "deserving individual" for the award. And calling Bachchan a living legend, Tenet director Nolan also appreciated his work in the field.

Movies of legendary filmmakers have been discarded, Bachchan had said

Bachchan has spoken about the need to preserve cinema several times in the past. At the opening ceremony of the 2018 Kolkata Film Festival, he lamented how several classics have either "gone up in flames or have been discarded on the scrap heap." Batting for immediate action, he predicted that in 100 years there might be no memory of these films.

Ahead of launch, India-specific OnePlus 9RT spotted on Geekbench

2022 SKODA KODIAQ sold out; bookings full till May

5 expensive properties, either presently or previously owned by celebrities

'GoT'-actress Natalie Dormer reveals she became a mother this January

'Brahmastra' motion poster out; Part-I to release in September 2022

Big B cuts ties with 'pan masala' brand on birthday

Christopher Nolan's next to focus on scientist who developed A-bomb?

After 'Tenet,' John David Washington stars in another sci-fi movie

Martin Scorsese, Istvan Szabo to be honored at IFFI Goa

Excited for 'Thalaivii'? Watch these Hollywood biopics in the meantime

RJD slams Amitabh for not tweeting about petrol price hike

No more Amitabh Bachchan's blog posts? Superstar hints at that